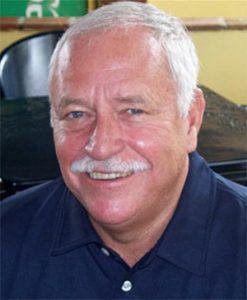 Sam A. Twiford, Jr., 77, of Country Club Drive, Elizabeth City, NC died at his residence Friday, May 28, 2021.  He was born November 12, 1943, in Elizabeth City, NC to the late Sam A. Twiford, Sr. and Dora Wells Twiford. Sam graduated from Elizabeth City High School in 1961, attended and graduated from East Carolina University with a degree in Commercial Art.  He furthered his education by attending Cincinnati College of Mortuary Science.  He was a retired funeral director and former co-owner of Twiford Funeral Homes.  Sam loved the funeral industry and became president of the N.C. Funeral Directors Association in 1989.  He taught at the Gupton Jones School of Mortuary Science in Atlanta Ga for several years and became Dean of the College.  Sam was a member of the First United Methodist Church and attended the Mt. Hermon United Methodist Church.  He was a former member and president of the Elizabeth City Jaycees, formerly served as a member of the Dare County Board of Education, former Lt. with the Dare County Sheriff Department, a member of the Manteo Masonic Lodge #521 AF and AM, member of the Scottish Rites of New Bern and a member of the Sudan Shrine Temple of New Bern.  Also, he was a member and Past Exalted Ruler of the B. P. O. Elks #856, and a member of the IORM Tribe #8.

Funeral services will be conducted Tuesday, June 1, 2021, at 11:00 am in the Twiford Memorial Chapel, Church St., by Rev. Renee Edwards.  Entombment will be in the New Hollywood Cemetery.  The family will receive friends and relatives immediately following the chapel service in the lobby of the funeral home and at other times at their residence, 201 Country Club Drive, Elizabeth City, NC.  The family suggests memorial gifts be made to the First United Methodist Church’s Endowment Fund at 201 South Road Street, Elizabeth City, NC 27909 or to the Mount Hermon United Methodist Church’s Memorial Fund, c/o Phyllis Cartwright, 869 Halls Creek Road.  The service will be live-streamed at www.facebook.com/TwifordFuneralHome. Twiford Funeral Home, 405 E. Church Street, Elizabeth City, NC 27909 is assisting the family.

To plant a tree in memory of Sam or send flowers to the family, please visit https://www.twifordfh.com/send-flowers/.