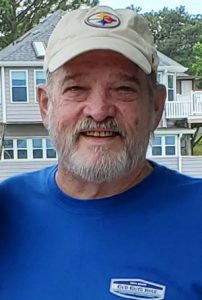 Terry was born in Uniontown, Pennsylvania on December 20, 1951 to the late Robert Thomas and Bernice Elaine Shrum. In addition to his late parents, he was preceded in death by his brother, Jeffrey Shrum, and his sisters, Susan Baer and Marilou Keberly.

Terry is survived by the love of his life, his wife of 50 years, LouEtta Shrum. His children, Terry Shrum II (Traci) and Stephanie Scarborough (Clayton). He was an amazing Pappy to his grandchildren Lillian Scarborough, Jordyn Scarborough, Taylor Simmons, and Terry Shrum III. He was a loving brother to Robert Shrum, Thomas Shrum, David Shrum, and Beth Mason. He leaves behind eight nephews, five nieces, and many great-nieces and nephews. Along with countless friends that have become family.

Terry was a man of many talents. He loved hunting in the mountains, fishing in the ocean, gardening and the Steelers. He was a hard-working, dependable smartass and an amazing cook. He is loved by many and will be missed deeply by all.

In keeping with his wishes there will be no service but instead a celebration of life. This will take place at the Coinjock Ruritan Club, 130 Coinjock Baptist Church Road, Coinjock, North Carolina 27923, on Sunday, July 25, 2021, from 4 pm – until. Feel free to stop by anytime and stay for as little or as long as you would like.