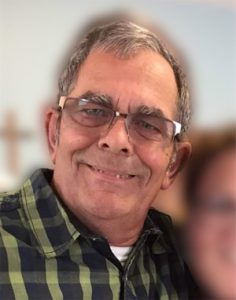 He is predeceased by his devoted mother Bernice Moore, his father Hillman Slater, and brother Timothy Slater. He is survived by his wife Rev. Susanna Fitch-Slater of Wanchese, sons John Slater of Westfield, Massachusetts; Michael Fitch and wife Kristen of Bucksport, Maine; and Tim Fitch and wife Sarah of Rodanthe, North Carolina. His proudest achievement in life was to be called “Tata” and “Pee-Paw” by his four grandchildren, Rebecca, Ethan, Daniel, and Jonathan. He is also survived by his sister, Karin Tyrrell and brother-in-law Jimmie of East Windsor, Connecticut, brothers, Ronald Slater of Windsor Locks, Connecticut, Paul Slater and wife Duvit of Kansas, and David Slater of South Royalton, Vermont.

Tom will be remembered as a loving husband, loyal friend and a gentle man who was always content to be behind the scenes supporting those he loved. He loved to cook and served his communities by preparing meals for those who needed encouragement. He was involved in a food ministry at every church he served. After Hurricane Dorian Tom prepared lunches daily for the Ocracoke School and community. He was his most authentic self when he was serving others. He was a man of deep quiet faith who trusted in Jesus Christ as his Lord and strength. He was a simple man who understood the act of self-sacrifice as the greatest sign of love and devotion.

A celebration of his life will be held Thursday, July 14, 2022, at 2:00 pm at Bethany United Methodist Church in Wanchese. The service will be live-streamed on the church’s YouTube channel (https://www.youtube.com/channel/UCvKaNdMcGqS95YiViFQ1ydQ/featured). The family and friends will gather after the service in the Fellowship Hall. He will be laid to rest in a private service at the Cudworth Cemetery in Wanchese.

In lieu of flowers donations in his memory may be made to Bethany United Methodist Church, PO Box 239 Wanchese, NC 27981.