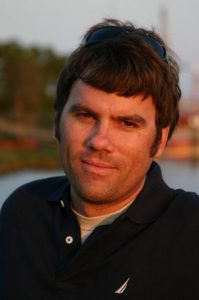 Todd was born on November 1, 1972, in Parkersburg, WV to Audie and Lois Krafft. He attended Parkersburg High School, Wesley College in Delaware and College of the Albemarle.

In early 1991, Todd enlisted in the US Air Force. After completion of technical school in Illinois, he was assigned to the Air Combat Command’s 93rd Bomb Wing, 328th Bomb Squadron at Castle Air Force Base in Atwater, CA. As a Senior Airman, he was assigned to the C-5 Galaxy fleet with Air Mobility Commands 436th Airlift Wing at Dover Air Force Base, DE until April 1997. His deployments included assignments overseas with both Air Force and NATO Operations in support of the Somalia Conflict/Civil War, the Bosnia War, and Desert Shield/Storm.

Todd was a beloved employee of the Town of Nags Head for over twenty years. He was recognized for his service by the Nags Head Board of Commissioners as the Earl Murray Jr. Employee of the Year in 2016. He served as Water Quality Coordinator and Environmental Planner, where he was responsible for managing the Nags Head Septic Health Initiative. Todd was dedicated to water quality issues and understood the importance of maintaining clean surface and groundwater in a coastal environment.

Todd worked on several projects with North Carolina Sea Grant, NC State, and the UNC Coastal Studies Institute to educate citizens and students regarding water quality issues and to advance the science in his field of study. Todd was also invited on numerous occasions to speak to other North Carolina coastal communities about his work. He is sorely missed by his current and former co-workers as well as the citizens and board members that he served.

A loving father of two children, Todd was passionate about music, motorsports, and the environment. He was an avid and award-winning motocross rider as a teenager. Todd hosted and curated The Independent Sound, an alternative rock show on WVOD, on Saturday nights from 7-9 pm from 2005-06.

Todd is loved dearly and will be missed by all his friends and surviving family; his children, Kayleen Lauren Krafft of Manns Harbor, NC and Tanner Davis Krafft of Cary, NC; his mother and father, Audie and Lois Krafft of Parkersburg, WV; his sister Robin Krafft, her family, Mike and Jesse McDaniel of Big Pine Key, FL; his sister Sharon Krafft, her partner John Mathews and their family Autumn Deem, Jeremiah Deem, Abby Daetwyler, Tucker Deem and Delaney Deem of North Central, WV; and his sister Mary Beth Krafft, her family Bobby Krafft, Zack and Ryan Murphy of Parkersburg, WV and Hobe Sound, FL.

A celebration of Todd’s life will be held on the riverbank of his childhood home in Parkersburg, WV on October 5th at 1:00. For further information or directions please call (304) 518-9767.

A celebration of Todd’s life will be held on the Outer Banks, NC at a date and time yet to be determined. Please refer to the Twiford Funeral Homes website at www.TwifordFH.com for an announcement with details regarding this gathering.

In lieu of flowers, memorial donations are kindly appreciated to the American Lyme Disease Foundation at www.aldf.com.