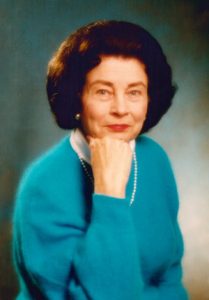 A native of Powells Point, she was born March 25, 1926, to the late Lindsey Lee Dowdy and Maude Inez Barnard Dowdy.

Gay was raised in both North Carolina and Virginia, graduating from Maury High School, Norfolk, VA in 1943. After graduation, she worked at Norfolk Naval Base through World War II and until 1951.

In 1952, she made Kitty Hawk, NC her home where she became a business owner with her husband Sam Beacham. She was a loving wife and mother. In 2004, Gay and Sam were honored guests at the National World War II Memorial dedicated by President George W. Bush.

A graveside funeral will be held at 10:30 am on Friday, July 26, 2019, at Austin Cemetery, Kitty Hawk, NC. The family will receive friends and relatives Thursday evening from 6:00 pm until 7:30 pm at Twiford Colony Chapel, Manteo.

In lieu of flowers, memorial donations may be made to DAV – Disabled American Veterans, PO Box 14301, Cincinnati, OH 45250 or online at www.dav.org.