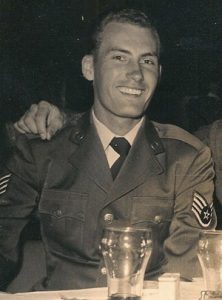 OCRACOKE — Walter Garrish, son of James Daniel and Ruby Austin Garrish died unexpectedly on July 6, 2019. He was born in Beaufort, NC on 1 February 1929.

He attended school on Ocracoke and later graduated from High Point College, NC. He enlisted in the Air Force on 5 October 1949 and retired as a Senior Master Sergeant after 22 years. After retirement in 1971, Walter worked for Raytheon Company where he retired in 1991 after 20 years.

He was predeceased by his wife, Germaine Garrish, of 53 years, his son Robert S. Garrish, his brothers James and Ward Garrish. He is survived by three children, Michael J. Garrish and his wife, Kathleen of Derry NH, Kathleen Hanson and her husband James of Hampstead, NC, and Karen Jefferson and her husband Peter of Virginia Beach, VA. He is also survived by six grandchildren, Nicole Hanlon, Erin Selke, Megan Crespo, Rachael Hanson, Matthew Jefferson and Ashley Hernandez. He has six great-grandchildren and two more on the way.

He passed away unexpectedly back in his hometown, Ocracoke, NC, at the age of 90. Memorials will be held in Ocracoke, NC July 13 and Hampton, NH (to be announced at a later date) at Remicks Funeral Home.

Twiford Funeral Home is assisting the family with arrangements. Condolences and memories can be shared at www.TwifordFH.com.

Louelle Spencer Midgett, 86, of Rodanthe, NC passed away Wednesday, July 8, 2020, at Vidant Medical Center in Greenville. She was born November 22, 1933, to the late Herman B. and Flora Burrus Spencer of Ocracoke, NC. Mrs. Midgett was preceded in death by her husband of 50-years, William Midgett; a sister, Gaynelle Tillett; and [...] Obituaries |  Full Article

On July 7, 2020 Carole Howell was called “Home”. Carole would be turning 80 this July. She was born in Hatteras N.C. and settled in Philadelphia around 8 years of age. She lived a full life as a devoted daughter to Charles and Murrell (Austin) Howell and beloved sister to Wendell and Vernell Dorner. She [...] Obituaries |  Full Article

MANTEO –It is with a sense of great loss that the family of Savannah Lee Brill announces her passing on July 4 ,2020. Savannah was born on January 23,1987 and she lived a life that was full of mountain tops and deep valleys.  She fought setbacks for the majority of her life, including some she [...] Obituaries |  Full Article