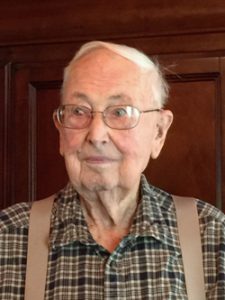 Born August 10, 1918 in Lewiston, NC, he was the son of the late Irene Vester Cobb and Frederick Arthur Ruffin.

Bill graduated from Wake Forest College in 1939 with degrees in both chemistry and math. In 1941, he completed Reserve Engineering Training at the US Naval Academy, where he was commissioned on May 5, 1942. He served as an Engineering Officer aboard destroyers in both the Atlantic and Pacific Theaters during WWII and saw action in five major engagements. He married Rosemary Louise Nestor on October 12, 1942. He was a proud member and officer in the VFW, the Rotary, and in the Paper Industry Management Association.

Upon retiring from Weyerhaeuser Company after 40 years of service as Mill Manager, he and Rosemary moved to Manteo, NC, where he kept active in his community. He was a Charter member of the Outer Banks SCORE (Service Corps of Retired Executives) and volunteered with this group well into his 90’s. He was also a member of Mount Olivet Methodist Church and served as a volunteer in all areas of the church administration until 2015.

A private family funeral with military honors will be held at 2 p.m. on Saturday, March 21, 2020, at Mount Olivet United Methodist Church with Rev. Matt Seals officiating. Due to the executive order issued to combat the spread of COVID-19, Mr. Ruffin’s funeral services will be private. Private entombment will take place at Roanoke Island Memorial Gardens.

In lieu of flowers, memorials may be made to Mount Olivet Methodist Church, PO Box 787, Manteo, NC 27954 or online at www.mountolivetumc.org.