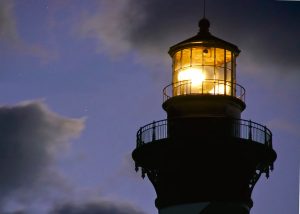 Cape Hatteras National Seashore and Cape Lookout National Seashore will celebrate International Lighthouse and Lightship Weekend on Saturday, August 17th and Sunday, August 18th from 9 a.m.-3 p.m. Park staff and members of both the Carteret County Amateur Radio Society and The Outer Banks Repeater Association will have HAM Radios set up at Bodie Island, Cape Hatteras, and Cape Lookout Lighthouses to communicate over the air-waves with other participating lighthouses and lightships from around the world.

HAM Radios will be set up in the vicinity of the respective lighthouses’ Keepers Quarters. Visitors are encouraged to interact with the HAM Radio operators and listen in as they communicate with other lighthouses and lightships.

The International Lighthouse and Lightship Weekend attracts over 500 lighthouse entries located in over 40 countries. Today, it is one of the most popular international amateur radio events in the world.

The Cape Hatteras National Seashore (CHNS) announced several recent updates and news items related to Hatteras and Ocracoke Islands in their latest Cape Chronicle newsletter. News items and events related to the National Seashore for January include the following: A total of 19 new or updated educational panels have been installed over the past two [...] Seashore News |  Full Article

Outer Banks Forever, the official nonprofit partner of the Cape Hatteras National Seashore, recently shared their upcoming 2023 projects and events, and invited folks to provide feedback on the organization via a communications survey, in a January update. The survey is focused on Outer Banks Forever’s communications with the public, which include monthly e-newsletters, blog [...] Seashore News |  Full Article

The Cape Point and Frisco campgrounds will open for the 2023 camping season on Friday, April 7, per a recent update from the Cape Hatteras National Seashore (CHNS). They will remain open for the 2023 season until after the Thanksgiving holiday. The National Seashore’s other two campgrounds at Oregon Inlet and Ocracoke Island will continue [...] Seashore News |  Full Article

The ferry dock at Cape Lookout Lighthouse sustained substantial damage during the most recent winter storm and will be closed to the public until repairs are complete. Until that time, park visitors should not use the dock for any purpose, Cape Lookout National Seashore officials said Tuesday. Because the dock closure prevents ferry services from [...] Seashore News |  Full Article

As the temperatures on Hatteras and Ocracoke Islands drop in the winter months, cold-stunned sea turtles begin to make an appearance along the soundside beaches. The North Carolina Aquarium on Roanoke Island recently reported that five cold-stunned Kemp’s ridley sea turtles and 22 green sea turtles were found on December 20 on Hatteras Island, bringing the [...] Seashore News |  Full Article

The North Carolina Beach Buggy Association (NCBBA) outlined their 2022 contributions in an update sent to members, which included a recent donation of $5,000 to the Cape Hatteras United Methodist Men. “CHUMM does such great work for needy folks in the community [and] we are proud to support them,” stated Al Adam, NCBBA President, in [...] Seashore News |  Full Article

Reminder: NCBBA’s last Adopt-A-Highway event of 2022 will be held on November 19