If you’ve ever walked along the beach of Cape Hatteras National Seashore, you may have been lucky enough to spot a sea turtle or a protected sea turtle nest. According to the park staff at Cape Hatteras National Seashore, loggerhead, green, leatherback, hawksbill (rare) and Kemp’s ridley sea turtles call the Outer Banks home, and from late spring through early fall (May to September), female sea turtles emerge from the ocean to lay their eggs in the sands of Outer Banks beaches, where they incubate until the time comes for them to hatch and return to the sea.

When the temperatures suddenly plummet in the winter, however, the sea turtles’ lives can quickly become threatened.

Every year, sea turtles swimming near Cape Hatteras experience “cold-stunning,” in which they become immobilized by a sudden drop in water temperature.

According to the North Carolina Wildlife Resource Commission’s (NCWRC) Strategic Plan for North Carolina Cold-Stunned Sea Turtles, “Sea turtles can become cold-stunned when local water temperatures drop below 55 °F (13 ºC) and they are unable to swim to warmer waters. When this occurs, sea turtles become hypothermic and lethargic, inhibiting their ability to swim or dive. As a result, cold-stunned sea turtles tend to float motionless on the surface and are pushed by wind and currents until they wash up along inshore beaches, sometimes in large numbers. ”

Thankfully, the staff of Cape Hatteras National Seashore, one of your OBX national parks, is actively working to help these turtles.

Paul Doshkov, a Biological Science Technician on Bodie Island, took the time to share a little more with us about cold-stunning:

“OBX weather patterns are consistently warm into the fall months, October to December, when sea turtles, mostly one to two-year-old juveniles, inhabit the waters of Pamlico/Albemarle sound. Ideally, the water temperatures in the sound gradually cool down as winter approaches and the turtles naturally make their way out of the sound and into warmer ocean waters. The issue arises when a sudden cold front descends on the area and cools sound water very quickly, which essentially surprises the turtles and they don’t have time to exit the sound before the onset of cold-stunning.

During the cold fronts, NPS BioTechs patrol sound-side shoreline on foot searching for cold-stunned individuals. Once found, the turtles are taken to the Sea Turtle Assistance and Rehab (STAR) Center at the North Carolina Aquarium on Roanoke Island. From there, aquarium staff nurse the turtles back to health and eventually release them into warmer ocean waters.”

According to Doshkov, if you come upon a cold-stunned sea turtle, you should call the Cape Hatteras National Seashore Stranding Hotline at 252-216-6892. You can also call N.E.S.T’s (Network for Endangered Sea Turtles) hotline at: 252-441-8622 or the North Carolina Sea Turtle Stranding and Salvage Network Hotline at: 252-241-7363.

“The good news is that the public can’t really go wrong, we are essentially one linked network and frequently communicate when strandings are reported” Dashkov said. “For example, NCWRC will call us directly if a Seashore turtle is reported on their hotline and vice versa.”

Let’s work together to ensure that our beloved sea turtles are protected all year long. 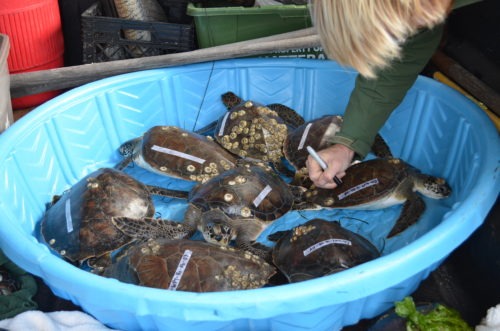 After going dark over the weekend, the Cape Hatteras Lighthouse was illuminated once again after the U.S. Coast Guard conducted successful repairs at around 7 p.m. on Sunday night. The lighthouse will remain on through Monday morning, as the Coast Guard finishes up remaining repairs to the light. Though the lighthouse itself is managed by [...] Seashore News |  Full Article

Island residents noticed that the skies were a little darker over the weekend, as the Cape Hatteras Lighthouse was not functioning and appeared to be turned off. Though the cause of the malfunction is not yet known, Michael Barber, Public Affairs Specialist for the National Parks of Eastern N.C., reported that the Cape Hatteras [...] Seashore News |  Full Article

Dorian-related debris stored in the National Seashore set to be go ...

February 6, 2020 | Seashore News | By: Peter Vankevich | From The: Ocracoke Observer

Cape Hatteras National Seashore Superintendent Dave Hallac praised Hyde County and their contractors on the progress removing the demolition debris from the Ocracoke Beach Access parking lot (lifeguard beach). The Seashore also on Tuesday released its 2019 visitor statistics posted below. “I am very impressed with their progress, especially in light of the myriad efforts [...] Seashore News |  Full Article

On Thursday morning, January 30, Cape Hatteras National Seashore law enforcement rangers collected a variety of beach debris, including old tires, lumber, decking material, and electrical wiring, during a patrol of the shoreline from Cape Point in Buxton to Ramp 49 in Frisco. While the debris was not from a single recent incident, the Cape [...] Seashore News |  Full Article

The Cape Hatteras National Seashore (CHNS) is pleased to announce that they are working with their lessee at Oregon Inlet Fishing Center, Oregon Inlet Marinas, LLC, to develop strategies to replace vulnerable structures and conduct site improvements at the marina. As such, members of the public are invited to provide input via https://parkplanning.nps.gov/oregon_inlet_fishingcenter by January 10, [...] Seashore News |  Full Article

National Seashore Reopens to Ocracoke Visitors on Dec. 2, But Some Facilities Will Remain Closed

National Seashore Updates for the Week of October 10

National Seashore Updates for the Week of October 4

Routes in front of villages reopen Oct. 15, Transition to night driving in process

National Seashore Updates for the Week of September 26