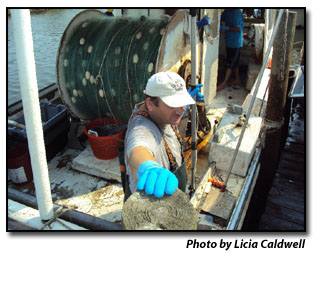 As a potential management strategy for the snapper-grouper fishery, catch shares has hit a nerve among North Carolina fishermen.

Nearly four years after catch shares were first pitched by some as a way to save the fishing industry in North Carolina, a proposed plan has been presented by the South Atlantic Fishery Management Council, the federal regulatory body for the region’s fisheries.

The initial comment period on the snapper-grouper scoping plan closes on Feb. 14, but all parties agree that it will be years before the matter is settled.

“We’re not supporting catch shares until the majority of fishermen want it,” said Brian Cheuvront, the state Division of Marine Fisheries representative on the 13-member council, which covers the coast from Hatteras south.

So far, Cheuvront said that feedback he has been hearing has been more negative than positive.

“I think it’s a really good thing for the fishermen to keep their eye on this. However, at this point, the council has no definite plans to go forward with any plan to institute catch shares in North Carolina.”

Catch shares — also called limited access privilege program, or LAPPs, and individual fishing quotas, or IFQs — allocates a percentage of the total allowable catch to an individual, or a community, or group.

Such programs are in place in select fisheries in Alaska, the Gulf of Mexico, and most recently, New England, among others, but reviews have been mixed.  And whatever the results have been elsewhere, watermen say, North Carolina fishing is unique and not a suitable candidate for the method.

Recent amendments to the federal Magnuson-Stevens Act that regulates fisheries includes a mandate that catch shares be considered in management plans, although councils are not required to adopt the strategy.

The Environmental Defense Fund, a New York-based nonprofit, has been promoting catch shares as an innovative way to give fishermen an investment in the resource, alleviate dangerous derby fishing — the rush to catch quota in the brief open time —while fostering sustainable fishing. The group’s website’s catch-share page features 12 videos of fishermen from different parts of the country stating their support of the strategy.

In one clip, Tyrrell County waterman Willy Phillips said that catch shares are not appropriate for all fisheries, but he believed such a program could be “a major improvement” in management of striped bass. If plans were tailored properly, he added, he’s “hopeful that catch shares per se will be the salvation of some fisheries.”

But Hatteras fisherman Ernie Foster, owner of the Albatross Fleet, said that the EDF’s professed goal of restoring the vibrancy of fishing communities does not match interest from Wall Street in buying fishing shares. The reality, he said, is that the little guy will be put out of business.

“You find a corporation that gives a rat’s ass about small communities,” he said. “There isn’t one.”

Foster said that catch shares may also be pushed by charter and recreational fishermen, which makes it clear that the interest in catch shares has more to do with financial gain than resource protection.

“The thing that makes catch shares attractive is if you are a big-time operator, and you can get your hands on a lot of shares, you can make a lot of money,” he said.

But the end result, Foster said, would be the collapse of the local fishing industry.

“What good is going to come to Dare County or any coastal county if they lose half their fishermen?”

Fishermen also say that fishing in North Carolina, with its intense weather and powerful currents that are in constant flux, is not like any other place. Dividing up a resource ahead of time, based on historic landings, would more often than not leave North Carolina fishermen with empty holds.

“The implementation of the Catch Shares Program will effectively add the commercial fishing industry of the Outer Banks to the long list of wrecks shown on the maps of the Graveyard of the Atlantic,” chamber chairwoman of the board Robin Mann wrote in a  Dec. 20 letter to the National Oceanic and Atmospheric Administration, the administrator of federal fisheries laws.

Eileen Dougherty, senior conservation manager with Environmental Defense, said that many of the concerns that Foster and others have are “design concerns” that could be addressed in devising a plan appropriate to the fishery.

“We are in the very beginning stages and fishermen can come to the table and voice their concerns,” she said.

For instance, Dougherty said, concentration caps could be established that prevent people from holding more than a certain amount of shares.  Or ownership of quota shares could be tied to ownership of an active snapper-grouper permit with an active vessel.

Other remedies, she said, could be putting a “use it or lose it” provision in a plan. Also, a loan program with low interest rates could be established to help pay the initial costs of entering the program.

“That’s the beauty of catch shares,” Dougherty said. “They are very flexible in their design.”

Catch shares is just one of the many proposals under consideration in the scoping document, although the complex topic used up much of the ink, said Kate Quigley, the council’s staff economist.

After reviewing the comments, the council will offer revisions at its June meeting and choose an action alternative, she said. Staff will then analyze the document for about 18 months, bringing it to the council every quarterly meeting.

The final draft document will likely take at least two or more years, she said, and will be presented for more public comment before being finalized.

In the process, the council could revise the proposals in the scoping document, Quigley said, or “they could drop catch shares altogether.”