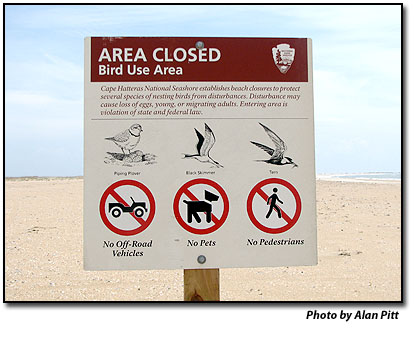 The National Park Service has released information and maps on pre-nesting closures for piping plovers, a shore bird listed as threatened by the federal government.

The pre-nesting closures will be in place by March 15, as required by the consent decree, signed off on by a federal judge in 2008.  The consent decree ended a lawsuit by environmental groups against the Park Service for what they termed inadequate protections for nesting birds and sea turtles at the Cape Hatteras National Seashore.

Park natural resource staff conducted the annual assessment of piping plover breeding habitat and identified pre-nesting areas based on current habitat conditions and consideration of the breeding activity of the birds in recent years.

According to the Park Service, temporary resource protection areas are established to protect threatened and endangered species, including piping plovers and sea turtles, and for species of concern, including American oystercatchers and colonial waterbirds (terns and black skimmers).

This year’s pre-nesting closures follow fairly closely what has been in effect each spring since 2008.

The pre-nesting closures allow for off-road vehicle access and some pedestrian access at most of the spits and points – at least until the birds start actually nesting and chicks begin hatching.  At that time, buffers around the nests, agreed to under the consent decree, kick in.

For instance, last year Cape Point was still accessible to ORVs and pedestrians after the pre-nesting areas were established on March 15. However, by May all ORV and pedestrian access to the Point was closed down because of nesting plovers and other birds.

A small area of Cape Point remained open but was inaccessible except by boat or wading in the water below the tide line.

Pre-nesting resource areas are closed to ORVs and to pedestrians.

The Park Service is also reminding visitors that pets must be physically restrained at all times on a leash no longer than 6 feet on all seashore beaches.

Click here to read an NPS summary of pre-nesting closures.

Click here to see maps of the closures at the points and spits.