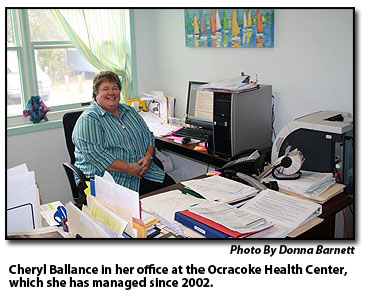 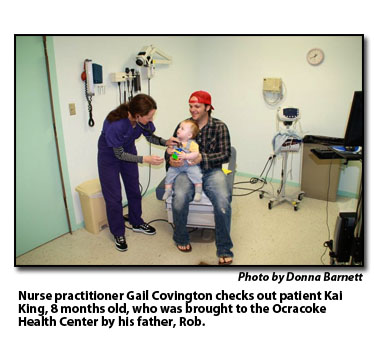 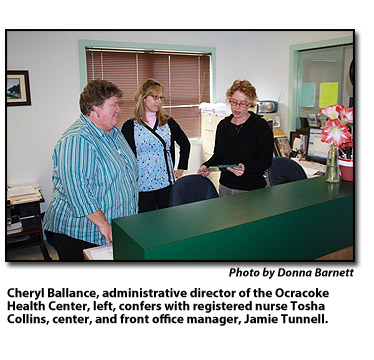 Cheryl Ballance sat at a conference table outside her office at the Ocracoke Health Center on a warm late winter day to talk about changes and progress that are on the horizon for health care in Ocracoke, Engelhard, and Hatteras village.

Ballance is a registered nurse who has spent most of her career in the field of public health in rural and underserved areas. She has worked as a nurse at the Ocracoke Health Center (OHC) and as a home health nurse for Hyde County.

In 2002, she became the first full-time administrative director of OHC, a 30-year-old non-profit, federally designated rural health center.  Today she is also administrative director of the 6-year-old Engelhard Health Center, another federally designated rural health center, and she has recently added the Hatteras Village Medical Center to her managerial duties.

Ballance has been working with the Hatteras Village Medical Center Board of Trustees and she says the center will re-open in May as a non-profit rural health center.

HealthEast Family Care closed its Hatteras location on Dec. 30, and villagers began looking for another health provider to keep the medical center open.

It was villagers who banded together to establish the first medical facility on the site in the 1960s. It was opened as a rural health center and operated that way for a number of years before it was occupied by private practitioners who eventually sold their practice to HealthEast, part of University Health Systems in Greenville, N.C.

The National Park Service owns the land where the building is located. The site was given to Dare County in the 1960s, with the proviso that it must be used as a health-care facility or it reverts to the Park Service.

In January, the Dare County Board of Commissioners agreed that Bobby Outten, county manager and attorney, would help Hatteras villagers incorporate a board and obtain non-profit status for the health center.

The corporation will operate the center, which will be managed by Ballance. Dare County will continue to provide the building and pay for its upkeep but will not fund the operation.

That process is well underway, said Ted Midgett, president of the five-member Hatteras Village Medical Center Board of Trustees. He said that the board is meeting weekly with Ballance and its members are hopeful that the doors will re-open in May.

“I think we can do it,” Ballance said recently, “though it may not be (open) five days a week in the beginning.”

When you talk with her about the change she is managing, you can’t help but catch some of her very upbeat, informed, and optimistic enthusiasm about the future of health care on the islands and Engelhard, just across the Pamlico Sound on the mainland.

Both the Ocracoke and Engelhard centers, she said, have been operating with funds and grants through the North Carolina Office of Rural Health and Community Care, which works to help rural communities serve the indigent and uninsured.

However, the state money “goes up and down,” and make planning for health care at the center difficult. And the state’s budget in now under more pressure to make cuts than ever before.

“We are in a position,” she said, “of not being able to break even by charges from patient services alone.”

In 2009, Ballance began looking for “other avenues” for grants. She applied for and received a grant for $80,000 to explore how the communities of Ocracoke, Engelhard, and Columbia in Tyrell County could work together and whether they could become Federally Qualified Health Centers.

The “federally qualified” designation, she said, is different from “federally designated” rural health center status and would make the center eligible for some of the $9 million in new federal money for community care.

Ballance said that Columbia eventually elected not to participate, but that she submitted a grant application for Ocracoke and Engelhard for $650,000 in renewable federal funding for operations at the two centers.

The application was submitted in December, and she said the grants will be awarded in August, but she is very optimistic.

“I feel like we have put in a very strong grant application,” she said.

The new funding would allow both clinics to expand their medical services.

The center is open Monday through Friday from 8 a.m. until noon and from 1 until 5 p.m. and provides after-hours urgent care.

With the Federally Qualified Health Center (FQHC) designation and the grant, the Ocracoke and Engelhard clinics would expand to include dental care and mental health and pharmacy services.

The Ocracoke and Engelhard centers would reorganize and merge their boards into one corporation, which will be known as the Coastal Community Health Alliance. Ballance would continue as administrative director of both.

Though the focus of state and federal funding is to serve indigent and uninsured patients, Ballance noted that the centers will also serve patients with insurance or who are covered by Medicaid and Medicare.

She added that the federal government has many reporting requirements from the health centers that are expected to set goals for the management of such chronic medical problems as high blood pressure and diabetes.

“The government is looking for improved outcomes,” she said.

Ballance explained that the Hatteras Village Medical Center would eventually operate under the Coastal Community Health Alliance umbrella. It was not incorporated in time to be part of the FQHC grant, but would operate as a “satellite” location.

Ballance has already obtained a one-time grant of $100,000 from NC HealthNet to get the doors open in Hatteras.

It’s “start-up” money, she said, that is designed to hire the health provider, and it will eventually be supplemented with patient care fees and even other grants that Hatteras would be eligible for as part of the Coastal Community Health Alliance.

The challenge now, she said, is to get the Hatteras Medical Center furnished and equipped, since HealthEast removed all of the equipment when it moved its operations to Avon, and to hire staff.

Ballance stressed that the Hatteras Medical Center will not compete with other medical providers in the community or the Community Care Clinic of Dare County, but will supplement them and work with them.

“This is an exciting time for health care in Ocracoke and Engelhard, and, I hope, Hatteras,” Ballance said.