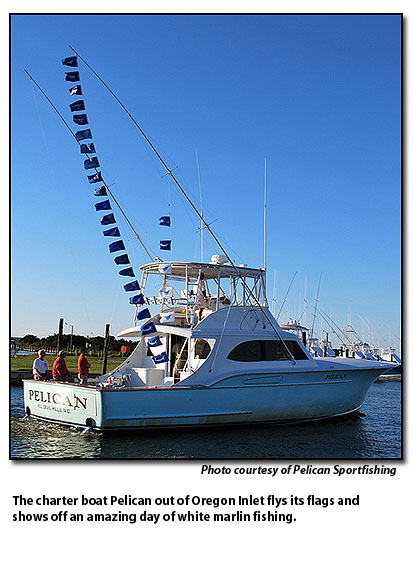 The boat fishing remains solid, while the surf and pier fishing has been scattered and sporadic.

The weather has been gorgeous for the most part the past several days, so whether you did or didn’t catch fish, you still had an enjoyable day.

Fishing from Pea Island and the tri-villages’ surf remains the same with some puppy drum and yearling drum being taken regularly. Sea mullet and blues are also keeping the fishermen entertained in the area.

The surf from Salvo to Avon has produced a mix bag of flounder, sea mullet, bluefish, puppy drum, and some pompano. There was word of some really good, sporadic sea mullet fishing over the past few days.

Cape Point has had a few really good runs of Spanish mackerel and bluefish in the mornings and evenings for anglers throwing metal lures. During the day, some bluefish and scattered puppy drum have been caught on bait.

Frisco area fishermen caught some bluefish, puppy drum, and sea mullet, but it didn’t sound like there was too much overall.

Hatteras offshore fleets are still getting good numbers of mahi-mahi, along with scattered billfish and some decent wahoo fishing.

Inshore boats have had some nice flounder and a few citation red drum. Some puppy drum and scattered gray trout were put on the boats.

The Hatteras Inlet surf fishing has been spotty, with scattered sea mullet and puppy drum being reported.

Ocracoke surf fishermen had some puppy drum and a few yearling red drum. Some good Spanish mackerel fishing was reported, with some fish in the 3-pound category. Lots of bluefish, spot, and sea mullet were also beached.

The area inshore boats have had good catches of Spanish mackerel, blues, and some citation red drum.

I’ve fished hard from the kayak the past week and it has been quite productive around Cape Point. Most days have consisted of large Spanish mackerel, along with bluefish up to 4 pounds and a few really good runs of albacore.

On a side note: I’ve seen a great deal and a wide variety of sharks. For all the sharking enthusiasts out there, now would be a good time to soak some baits for toothy critters.
I’ve also seen a great deal of sea life this past week, including some huge pods of dolphin, some extremely large loggerhead turtles, tarpon, a few yearling drum, and several large and juvenile whales.

These creatures can usually be a sign of good fishing, as they require a lot of bait and fish to feed upon.

So, we sit and wait for the water temps to fall to trigger the fall migration of fish, but I doubt it’ll be much longer now.

However, whether the fishing is fast or slow—it’s always better than working. So come join us on our precious islands and relax a little bit.

Until next week — tight lines and fair weather.