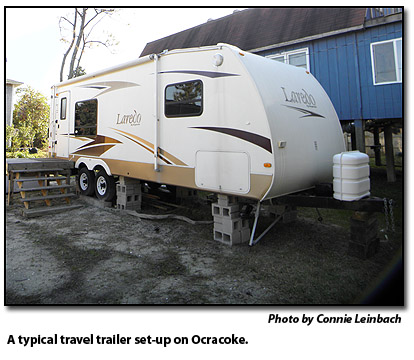 Without much fanfare, the Hyde County commissioners voted on Dec. 5 to put restrictions on the use of travel trailers as permanent housing on Ocracoke.

The island has seen an influx in recent years of seasonal and permanent workers living in the trailers because of a shortage of low-cost housing on the island.

Bill Rich, chairman of the Ocracoke Development Ordinance Board, explained that discussions about travel trailers began in April after the building inspector, Jerry Hardison, reported having difficulty with enforcement since travel trailers are not in the building code.

“It’s been kind of a nightmare of abuse,” Rich said.

Some trailers were hooking into the septic systems of nearby homes and using hoses from nearby houses for water, noted Ocracoke commissioner Darlene Styron.

She noted that some trailers were leaking, and some did not meet the set-back requirements.

After each meeting, new questions came up that had to be addressed.  One was whether three trailers on one lot required three separate water hook-ups.

“We went round and round on this issue and had public input,” she said.

“We tried to put definition into the code so that travel trailers have to be hooked up to their own water, septic, and electricity and be in compliance with health and safety rules,” Rich continued.

Rich explained further, after the meeting, that members of the public–sometimes 25, sometimes only five– attended all the meetings and that with their input, the ordinance parameters changed after every session.

That’s why there was only one person at the public hearing on Dec. 5.

Mary Haggerty, an Ocracoke resident, spoke against the ordinance, noting that it was discriminatory.

The discrimination involves the yearly fees, such as a Department of Motor Vehicle fee and a possible yearly permit, she said.

“That’s discriminatory,” she said.  “A fee every year is going to be tough for a lot of working people. There are lots of people living in tents and outbuildings, and they’re not regulated.”

Haggerty also questioned how — since the ordinance requires travel trailers to be able to be quickly moved in the case of an emergency evacuation – emergency officials will get more than 110 trailers off the island, along with all the tourists and residents.

She also was concerned that since the ordinance requires that travel trailers be readily mobile, would they wash into the street or other buildings should flooding occur?

County Manager Mazie Smith explained FEMA requires travel-trailers located in a flood zone to be ready at all times for evacuation. By not complying with FEMA rules, the county would be ineligible for funding in the event of another disaster.

Styron added that the state regulates the use of travel trailers.

“We can’t enact a law that’s lesser than what the state already has,” she said, adding that travel trailers are not designed to be permanent residences.  “The electric system is not to the same code as a house.”

Under the ordinance, crafted after the numerous meetings, a trailer has to remain registered with the DMV and insured, capable of passing applicable safety inspections, and capable of being moved onto a public highway without dismantling structures, such as decks.

Additionally, the travel trailer must obtain all applicable permits, such as for water, sewer, electric, and those required by state agencies, such as the Coastal Area Management Act.

Both Rich and Styron said a fee for permitting travel trailers, which is part of the ordinance, has not been set.

Rich said they may not even set a fee if compliance can be enforced without one.

Tom Pahl, a member of the development board, said that this ordinance applies only to new trailers and not to those already in place that are in compliance.

A  map drawn up by Brian Pompeii, a Ph.D. candidate in coastal geography, and given to the Ocracoke Foundation, shows that this year, 27 percent of the homes on Ocracoke are owner-occupied.  In 2000, the percentage on Ocracoke was 35 percent. The national average is 60 percent.

There are 247 year-round homes on the island and 115 travel trailers.

His map also shows that there are 79 year-round rentals, 125 private summer homes, and 331 weekly vacation rentals.