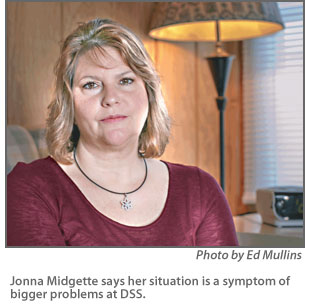 In the tight-knit and unique community on Hatteras Island, a number of people say veteran social worker Jonna Midgette has been missed since her abrupt departure this summer from the county’s Division of Social Services (DSS).

“This girl knew every one of her people personally,” said new Dare County Commissioner Danny Couch, who represents Hatteras. “She was pretty much on call twenty-four seven…Her reputation down here, she was pretty much a superstar.”

Midgette’s 19-year DSS career ended when she was terminated from the Adult Services unit on Aug. 8. Subsequently, her claim of wrongful termination was denied at all three steps of the county’s grievance procedure. Jay Burrus, the Director of Health and Human Services Department which includes the DSS, declined to comment on her termination, characterizing it as a “personnel matter.”

The Sentinel has obtained an audio tape of the final Oct. 5 grievance hearing where Burrus stated that a key reason for the termination was Midgette’s “grossly inappropriate” behavior “mostly directed at me,” during a pivotal July 29 meeting. “I didn’t really fire Jonna,” he said. “She fired herself.”

For her part, Midgette calls her termination “unjustified” and sees it as the culmination of a years-long effort to target her. “I believe that the reasons given for my….termination are misrepresentations of my work ethic and my work product, and a wholly inaccurate portrayal of my actions and demeanor during the July 29 meeting,” she stated at the Oct. 5 hearing.