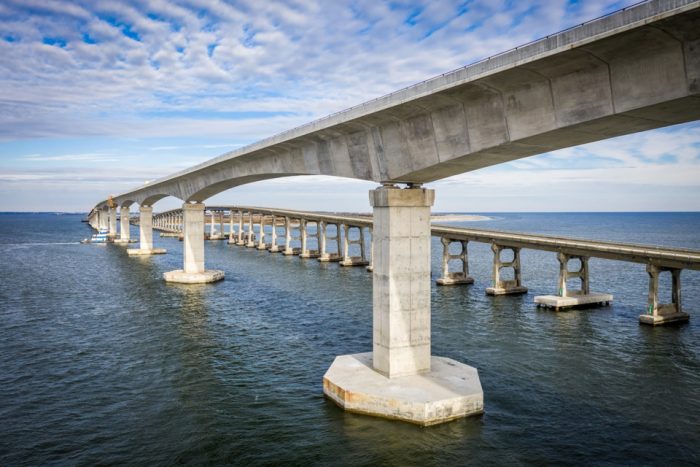 Final touches on the new bridge across Oregon Inlet will restart in September, while the Jug Handle Bridge is steadily progressing at both ends of the project towards its late 2020 / early 2021 completion date.

Remaining construction work on the Basnight Bridge and the corresponding lane closures were both temporarily halted on June 15 to accommodate for summertime traffic.

Work is expected to restart again around September 15, and once all remaining work is complete, the current 45 mph speed limit will be increased to 55 mph.

“There will be potential lane closures on Basnight [Bridge] in the fall for some final what we call ‘Point and Patch’ work on the bridge,” stated NCDOT Public Relations Officer Tim Hass.  “Whether that will start immediately on the first day available (September 15) or later is yet to be determined.”

“…the Basnight Bridge speed limit is 45 because it is still considered an ‘active construction zone’. It will eventually be lifted to 55.”

Meanwhile, demolition on the old Bonner Bridge is roughly 15% complete. Working from the top of the bridge down, crews are loading the large pieces of debris onto barges that are then shipped off to various sites offshore, where the pieces are then submerged to start a new life as artificial reefs.

At the Jug Handle Bridge site, work is steadily progressing at both the southern and northern terminals of the planned 2.4-mile long structure. The Jug Handle Bridge is considered part of Phase II of the Bonner Bridge Replacement Project, and is the last of the three bridges within the project guidelines to be built. The bridge will effectively bypass the S-Turns section of N.C. Highway 12 north of Rodanthe, which is highly susceptible to breaches during storms.

In the next month, steel pipe pile installation will continue to take place at both the southern and northern work trestles for the bridge, and track girders will also be installed as individual steel pile clusters are completed. Concrete is being placed for bridge spans at both sides of the project, roughly 100 feet from the shoreline in Rodanthe and roughly 1,650 from the shoreline at the northern end, and embankments are also being constructed for access to the new bridge, which will not affect the existing N.C. Highway 12.

“As far as getting into the sound, we technically are already there in that we are constructing the trestle and doing some pile driving,” stated Hass. “But it will probably be fall at the earliest before you see more obvious ‘bridge construction’ activities out there.”

Based on the current schedule, the Jug Handle Bridge is expected to open to traffic by late 2020 or early 2021. More information on the bridge project can be found at https://www.ncdot.gov/projects/nc-12-rodanthe/Pages/default.aspx.