Family and friends will hold a candlelight vigil Friday night at the Cape Hatteras Lighthouse at 5 p.m. for the two women and two young children killed in last week’s massive fire at a duplex in Buxton.

The Oct. 23 blaze happened in the Cottages at the Cape neighborhood, once part of military housing dating back to 1958. Today the complex is home to a mix of Coast Guard and local families. The wife of a Coast Guard member, Trina Ramsey, and the couple’s daughters Zoey, 7, and Emma, 4, were killed in the fire, as was Sarah Quigley, a fishing charter captain.

In a GoFundMe account set up for the Ramsey family, Zoey was described as a big smile that would light up any room and hugs that would warm any cold day.” Her little sister Emma was “our little spit fire with a heart of gold.”

Their neighbor Sarah Quigley grew up in Northern Virginia and moved various places around Loudoun County and southern Maryland, but she always longed to live by the ocean.

The 34-year-old finally made her dream come true, running a fishing charter on the Outer Banks of North Carolina and blending families with her husband Timothy within sight of the Cape Hatteras Lighthouse in Buxton. 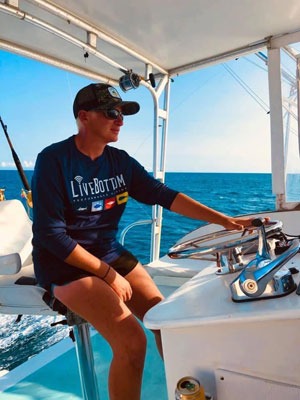 Quigley’s husband suffered smoke inhalation and multiple broken bones after escaping the flames by jumping from a second-story window. He remained in ICU at a Virginia hospital Wednesday. Two of their younger children, 16-year-old Kat and 11-year-old Rory, weren’t home Friday; they were away visiting their grandparents.

“Their mother, Sarah, was lost to the fire; their father and a family friend were badly burned; and their close friends and neighbors in the duplex–a mother and her two young children–were also killed. Their beloved beach dog, Tonka, and pet lizard, Mushu, also perished in the fire,” a family friend wrote in a GoFundMe set up to help.

In her obituary, Quigley’s family said was devoted to her children and community and only saw the good in people.

“From Purcellville to Bluemont, Berryville, Hollywood (Maryland) to Buxton, Sarah collected lifelong friendships and made thousands of positive memories for those she wrapped her arms around,” her obituary reads. “Her loss leaves a void impossible to fill. Her star will shine forever bright above the ocean, where she truly belonged.”

Friday’s vigil will be held at 5 p.m. at the lighthouse.

If you’re looking for ways to help the families who lost loved ones, their homes and belongings in the fire, GoFundMe has gathered a list of vetted fundraisers:

The Island Free Press reports that housing is an immediate need for those displaced in the blaze. Information on how to help can be found here.