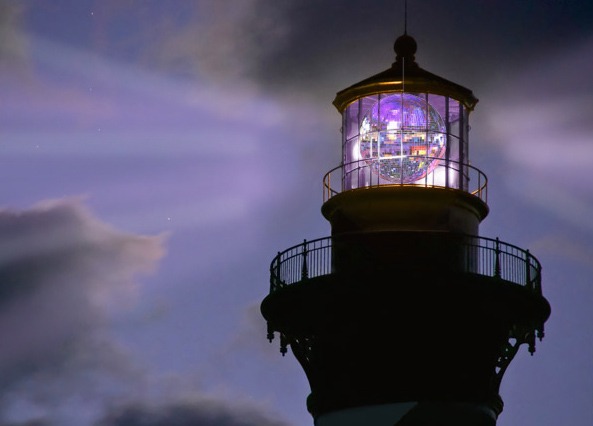 Project officials recently announced that a giant disco ball will be installed at the top of the Cape Hatteras Lighthouse as part of a years-long renovation project to restore the historic structure to its former glory.

Replacing the light at the top of the tower was always part of the multi-faceted restoration project, but initially, the project team planned to either re-install the original first-order Fresnel lens, or create an identical and historically accurate replacement.

“When we revisited the plans, we realized that a disco ball would be much groovier, and would be way easier to build than that complicated historic light thing,” said one of the architects associated with the project.

The current light consists of a 1950s-era beacon, which rotates every seven seconds.

But the new lighting system will include a mirrored 10-foot-wide disco ball, an accompanying strobe light that will flash every .25 seconds, and a giant speaker system that will play the Saturday Night Fever Soundtrack on repeat in order to provide the maximum party atmosphere. (Blacklight options are also being considered.)

Many Buxton residents who live close to the lighthouse are opposed to the disco ball, voicing concerns that the flashing mirrored lights will cause sleep disruptions, or simply stating that “Disco sucks.”

Officials have responded to these criticisms by saying that the ball will be turned off from 4:00 a.m. until 6:00 a.m. to allow the public to take a disco nap, and that opponents of the project “are not cool” and can “sit on it.”

“The ground-level floor of the Cape Hatteras Lighthouse already has a groovy marble checkerboard floor,” said project consultant Barry Gibb, “so when it was built in 1870, the architects clearly had disco dancing in mind.”

Additional funds will be needed to complete the disco ball’s custom construction, but officials say they are raising this money by offering sponsorships to corporations, which will include billboard-like advertisements painted on the side of the lighthouse. Motel 6 has already expressed interest in becoming a sponsor as part of their “We’ll leave the light on for you” marketing campaign, as have pharmaceutical companies Cialis and Viagra.

Once complete, a ribbon-cutting ceremony will be held at the lighthouse with guest speakers John Travolta and Disco Stu, followed by a party that is expected to last from opening day until a week later.

For more information on the project, including where to purchase fish-tank platform shoes on Hatteras Island, click here.