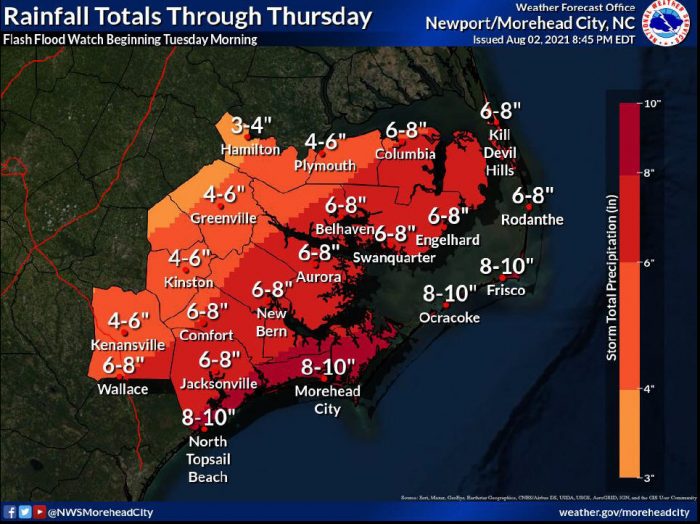 Multiple rounds of heavy rains are expected over the next three days, and a Flash Flood Watch is in effect for Eastern N.C., including Hatteras and Ocracoke Islands, per a recent update from the National Weather Service Newport / Morehead City office.

A stalled front will remain near or over Eastern North Carolina for the majority of the upcoming week. At the same time, a series of disturbances will move along this front, and will bring periods of heavy rain to the area. Rainfall totals of 4-8 inches are expected inland, with 6-10 inches along the coast, and isolated higher amounts are possible.

Due to recent heavy rains, soils are very saturated and cannot hold much more additional rainfall, which will lead to greater runoff issues. Most of the coastal N.C. area has received between 3-5 inches of rain in the past week, which is 200% to 400% above normal.

Heavy rains in the Outer Banks area have the potential to produce flash flooding and flooding of low-lying areas, and inundation of roadways, resulting in impacted travel, is possible. Motorists should not attempt to drive around barricades or drive cars through flooded areas.