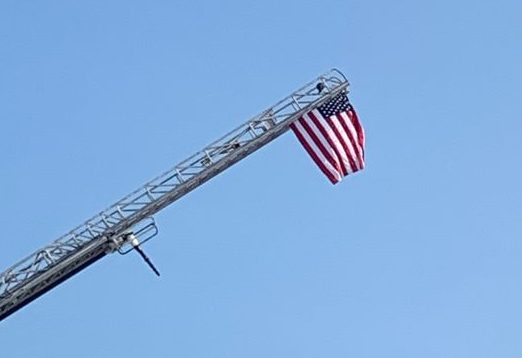 Volunteer fire stations throughout Hatteras Island honored the fallen heroes of 9/11 on Saturday by displaying the American flag at the top of fire trucks that were prominently displayed in front of the villages’ individual firehouses.

Though traditionally volunteer firefighters, first responders, and members of the U.S. Coast Guard make a climb to the top of the Cape Hatteras Lighthouse on the anniversary of 9/11, this year, the gathering had to be canceled due to both the ongoing lighthouse restoration project, as well as the Coronavirus pandemic.

Nevertheless, travelers along N.C. Highway 12 were reminded of 9/11 on Saturday and its impact, thanks to the patriotic display that was present at all village fire stations throughout the island.

The annual lighthouse climb, (which began in 2012), as well as this year’s island-wide gesture at the local fire stations, honors the fallen of New York, Washington, D.C., and Shanksville, Pennsylvania. More than 400 first responders perished at the Twin Towers, including 343 firefighters, 23 members of the New York City police force, and 37 members of the Port Authority Police.