With just a few minor items to complete, such as the final clean-up of miscellaneous construction materials and adding crosswalks, the Hatteras Village Pathway is nearing completion, per a recent update from project organizers.

The project, which was featured on the October 2021 cover of Carolina County magazine, (the monthly magazine of North Carolina’s electric cooperatives), includes a multi-use paved pathway that extends from the heart of Hatteras village to the northern town borders, with a loop around Eagle Pass Road.

“They plan to do the crosswalk markings today, and then in the next week or two, they will do all the final cleanup, backfill, and miscellaneous punch-list items,” stated Chairperson for the Hatteras Village Community Center District (HVCCD) and longtime advocate for the project, Dennis Robinson.

The majority of the pathway has been up and running for most of the summer, but these final tasks mark the end of a project that has been in the works for roughly 15 years.

The Hatteras Pathway project received a $342,640 Tourism Impact Grant in 2020, which represents about a third of the total project cost of $1,165,027. An additional $342,000 or so was collected through the village’s designation as a special tax district, and earlier in 2021, the Hatteras Village Civic Association, (through Cape Hatteras Electric Cooperative), received a $360,000 loan from the U.S. Department of Agriculture Rural Economic Development Loan and Grant (REDLG) Program.

The initial surveying for the pathway began in March of 2021, and a large chunk of the paving was completed by the end of June. With just a few minor items left, (which should not affect visitor use), the entirety of the pathway is currently open to the public. 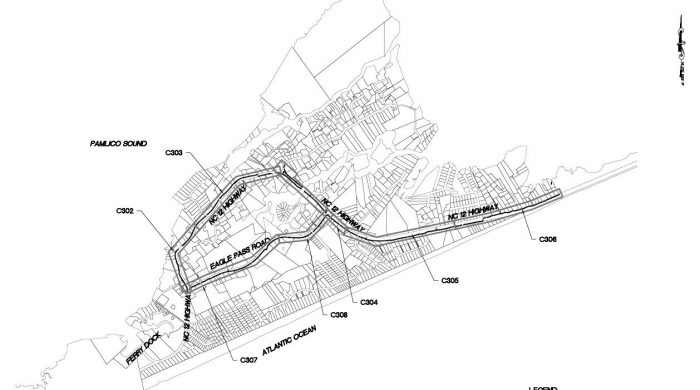