The Hyde County commissioners, at their Oct. 7 meeting, agreed to life the ban on alcohol sales on Ocracoke during the Hurricane Dorian emergency as of Monday (Oct. 14).

The commissioners also discussed lifting the evacuation order at their meeting this month since two petitions had circulated on the island. One, signed by about 28 businesses, asked to allow visitors in and the other petition, with 160 signatures, asked to wait until certain benchmarks are met before visitors are allowed back.

“It’s absolutely vital that we reopen and energize the economy that’s vital to us and, quite frankly, to Hyde County,” said Tom Pahl, Ocracoke’s county commissioner. He said that the Deputy Control Group, which had met that day, agreed to lift the alcohol sales ban when the food distribution by the volunteer agencies left the island. That distribution ended Oct. 12.

One of the benchmarks was cleanup of the massive amount of debris lining the island streets, and the second is the allocation of ferry space. There are a growing number of off-island contractors coming to the island and what if there was another evacuation since it’s still hurricane season?

Another consideration is the restoration of N.C. 12 at the north end of the island.

Although the mandatory evacuation for Ocracoke is still in effect while the island rebuilds, the commissioners also pushed back the island-wide curfew hours. It is now from 11 p.m. to 6 a.m.

Hyde County Emergency Services Director Justin Gibbs told the commissioners that, to date, 3,928 volunteers logged 33,334 hours helping out on Ocracoke. Both the Baptists on Mission and Samaritan’s Purse volunteers were scheduled to leave Oct. 12.

“The Baptists have done more than 25,000 meals and have helped tremendously,” he said. Ocracoke will get some shipping containers in which to store building materials at the NPS parking lot.

The Joint Recovery Center opened in the parking lot of the Variety Store, he said. This trailer is staffed with people from and state agencies is to collect a needs assessment for all on the island.

Pahl also reported that of the approximately 1,200 homes on the island, 413 had their electric meters pulled. “That’s an indicator of how high the water was,” he said. Of those, 120 have not yet had power restored.

“Many more without flood insurance were damaged,” Pahl said.

He said that 56 percent, or 168, of Ocracoke Island Realty’s 300 cottages are OK. Twenty-nine percent are off the market because they need major work. Three percent were destroyed or so damaged that it will be more than a year until they are up and running. Twelve percent were not analyzed, he said.

He said it’s not known how many people are displaced, “but there’s no one on Ocracoke who doesn’t have a roof over their head–for now,” Pahl said. Between OIR and Blue Heron Vacations, 67 rental homes are being used for displaced people, but a lot of rental homes bypassed going through a realty company and just offered their houses to people use.

“Also, friends and family have taken people in and some (residents) have left the island,” he said. He estimated 400 to 500 have been displaced and that 160 to 200 homes are uninhabitable.

As for lodging, Pahl said some hotels and motels have their lights on. The Anchorage Inn has 25 rooms; the Pony Island has a number of rooms available and Bluff Shoals has fewer than 10 rooms.

“So we can house a growing work force,” he said. “But we can’t solve this problem with a soup kitchen and volunteers,” he said. “Private sector solutions will solve this.”

The Ocracoke Civic & Business Association polled its member businesses as to their status post-Hurricane Dorian.

The following is the update as of Oct. 10, sent in an email. 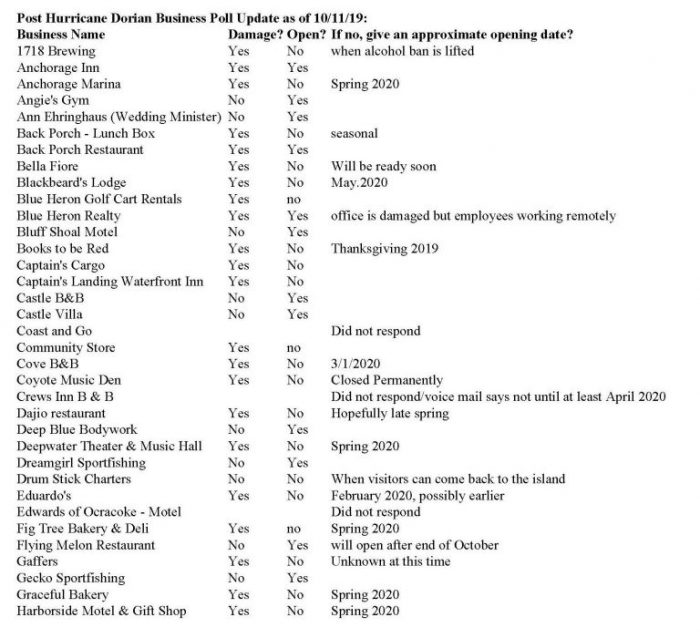 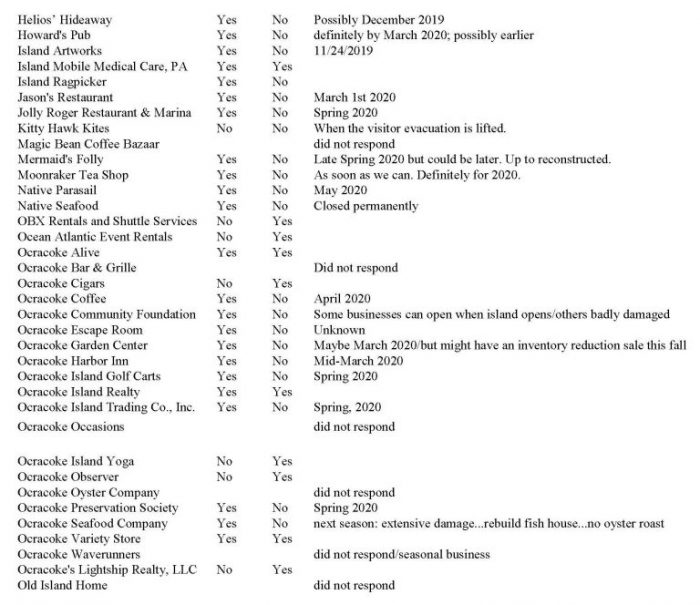 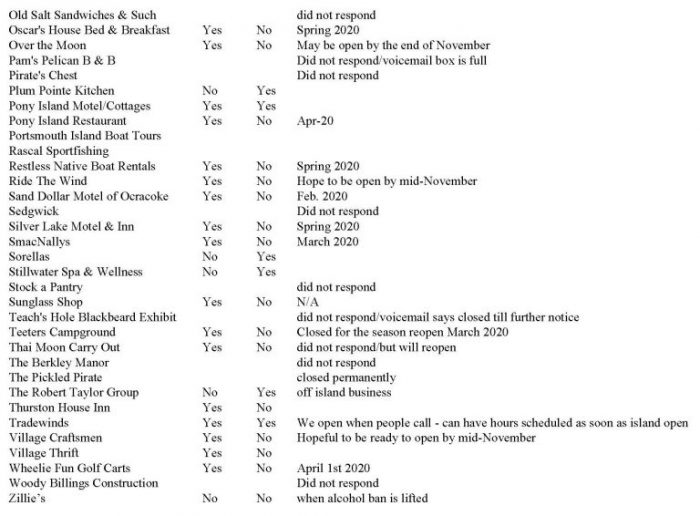 For those wanting to volunteer on Ocracoke, the following organization is now accepting volunteers:

If you have questions about special donations or offers of help, email ocracokedisasterrelief@gmail.com.