A late February or early March opening of the Jug Handle Bridge is still a possibility, despite a series of early 2022 winter storms, but there is not a confirmed opening date just yet, per a recent update from N.C. Department of Transportation (NCDOT) Communications Officer Tim Hass.

“We are getting closer, but we are still not to the point where we can give a definitive date, either for a Community Day or for moving traffic onto the bridge,” stated Hass. “It still could be as early as that last week of February/first week of March. However, there are still many factors that will determine what the final date will be.”

While all structural components of the bridge are complete, in order to open the bridge to traffic, construction crews need to complete the grinding and grooving operations to give the bridge a textured surface to drive on. This work is very weather-dependent, as low temperatures can slow the process down.

In addition, other items that need to be completed include removing the final two cranes and work trestle, finishing the concrete islands and driveways that are required for the approaches to the bridge, and other punch-list items that will make the bridge safe for motorists and pedestrians.

Once the bridge is complete, a celebration is being planned to mark the occasion, similar to the Community Day that was held for the Bonner Bridge replacement in February of 2019. During that event, a ribbon-cutting ceremony was held with numerous stakeholders and Gov. Roy Cooper in attendance, followed by an opportunity for the public to walk or ride a bike on the new bridge before it opened to vehicular traffic.

“As far as the Community Day goes, we continue to work with Dare County to determine possible dates and events,” stated Hass.

The Jug Handle Bridge was officially 95% complete as of December 2, 2021, per a quarterly update from the NCDOT’s resident engineer for the project, Pablo Hernandez. 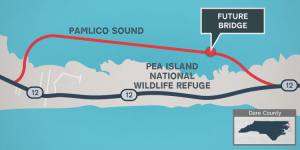 Once complete, the Jug Handle Bridge will connect the southern portion of the Pea Island National Wildlife Refuge to northern Rodanthe, bypassing the S-Turns section of N.C. Highway 12, which is highly susceptible to breaches and ocean overwash during storms.

More information on the bridge project, which includes project history, maps, documents, and videos, can be found at https://www.ncdot.gov/projects/nc-12-rodanthe/Pages/default.aspx.