Multiple weather events will impact the Outer Banks this week, and a High Surf Advisory, Coastal Flood Advisory, and Wind Advisory are in effect, per an update from the National Weather Service (NWS) Newport/Morehead City office.

Strong NE winds are developing now between a strong high pressure system in the north and Subtropicalstorm Nicole to the south. This will lead to an extended period of sustained 25-35 mph winds with gusts up to 50 mph across coastal Eastern N.C.

As a result of these winds, minor to moderate coastal flooding will be possible, as well as the potential for ocean overwash and beach erosion.

Portions of N.C. Highway 12 may be impacted by ocean overwash over multiple days, and through multiple high tide cycles. As of Tuesday morning, November 8, there was no overwash on the highway, however, there were areas of blowing sand on the roadway and travelers should use caution.

There is the potential for 1 to 2 feet of inundation above ground level along the oceanside from Duck to Ocracoke. Residents and visitors in vulnerable oceanfront locations should be ready to take protective actions. The most likely timeframe for flooding is Tuesday and Wednesday, November 8-9.

Meanwhile, Subtropical Storm Nicole is expected to strengthen over the next few days, making landfall across the Florida Peninsula, and then is expected to move up the interior SE coast late this week.

There is an increasing likelihood that the system, or remnants of the system, will impact Eastern N.C. by late Thursday night into Friday evening, bringing strong southerly gale force winds, additional coastal flooding, a period of heavy rain and localized minor flooding, and/or isolated tornadoes.

The Hatteras-Ocracoke ferry operations have been suspended due to high winds and rough conditions as of Tuesday at 7:00 a.m., per an update from the North Carolina Department of Transportation’s Ferry Division. Ferry service will resume once weather conditions improve. 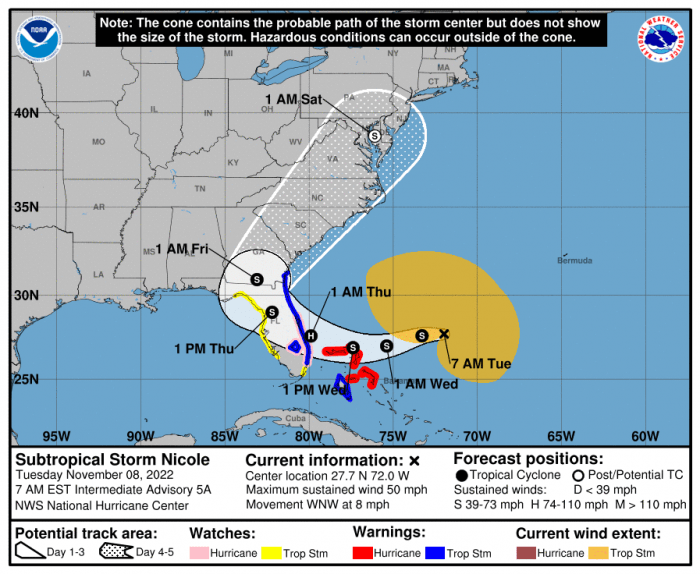