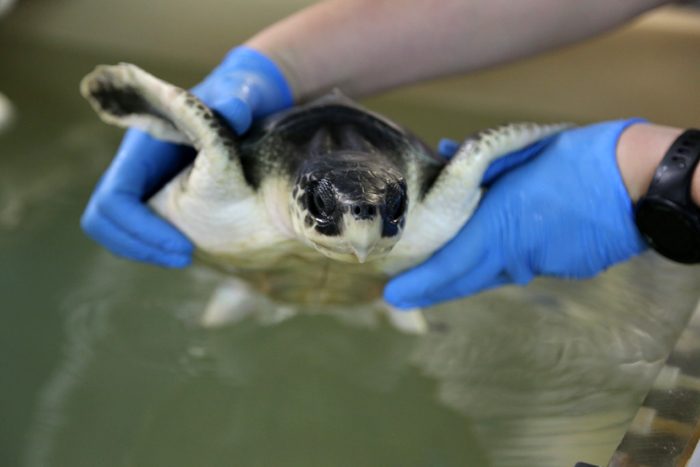 Sudden temperature drops during the holidays resulted in a cold-stunning event and delivery of nearly 250 sea turtles spread among the three North Carolina Aquariums beginning Dec. 20. The N.C. Aquariums at Fort Fisher, Pine Knoll Shores, and on Roanoke Island also home to the renowned Sea Turtle Assistance and Rehabilitation (STAR) Center care for weak or injured sea turtles throughout the year. This winter influx of cold-stunned sea turtles includes loggerheads, greens, and Kemp’s ridleys caught in the frigid water and unable to swim.

“Turtles came in steadily. A special thanks to the teams at the Aquariums and the other turtle heroes this season—the area National Parks staff and N.E.S.T. volunteers who spent their holiday patrolling the beaches in miserably cold temperatures for days on end to locate and rescue as many as possible,” said Emily Christiansen, chief veterinarian, North Carolina Aquariums.

Network for Endangered Sea Turtles (N.E.S.T.) is an all-volunteer non-profit organization dedicated to the protection and conservation of sea turtles and other protected marine wildlife on the Outer Banks of North Carolina from the Virginia line to south Nags Head. The Aquariums also care for cold-stunned turtles found outside of North Carolina. Earlier this season, a volunteer pilot program, Turtles Fly Too, Inc. transported cold-stunned sea turtles from Cape Cod to Beaufort which were then transported to rehabilitation facilities along the coast.

“Together, our North Carolina Aquarium teams have been responding quickly and compassionately to support the rehabilitation of this large number of cold-stunned sea turtles. It is an honor to work with so many partners and volunteer organizations to rehabilitate these turtles and get them back to warmer waters in the ocean,” said Hap Fatzinger, director, NCAFF.

Sea turtles are cold-blooded reptiles which means their surroundings determine their body temperature. A sudden drop in temperature can cause cold-stunning, like hypothermia in humans.

“They become lethargic, unable to swim, and can be pushed onto the shore by the tides and wind. If they can be rescued before they succumb to the cold, they have a chance to be rehabilitated,” said Christiansen.

During cold-stunning events, turtles found from Ocracoke and north are taken to the STAR Center, and those found in the Cape Lookout area are taken to the Center for Marine Sciences and Technology (CMAST) in Morehead City for triage.  Following initial physicals, treatments and assessments, the N.C. Aquarium veterinary team and N.C. Wildlife Resources Commission staff distribute the turtles to rehabilitation facilities along the coast, including the NC Aquariums and KBSTRRC.

The rehabilitation process includes slowly warming up the turtles to their optimal body temperature, administering medications prescribed by the veterinary team, treating any injuries, building up the turtles’ body condition and making sure they can swim and resume appropriate turtle behaviors. Once the turtles are healthy and have a final veterinary check, they are ready to be released. Before release, the veterinary team places a microchip tag in the shoulder area of each sea turtle. The chip can be scanned if the turtle ever re-strands, and information for that turtle can be retrieved.

Many of the turtles will make a quick recovery, and the Aquarium teams have already released 16 of the rehabilitated animals. Crews from Duke Marine Laboratory in Beaufort, N.C Wildlife Resources Commission (NCWRC), and the U.S. Coast Guard, CMAST, University of North Carolina Institute of Marine Sciences, and other volunteers transport the turtles to the Gulf Stream where the ocean water is close to 70 degrees in the winter.