She stood proudly as the symbol of island education for nearly 50 years, until Hurricane Dorian destroyed her beyond repair on Sept. 6, 2019. Now the main Ocracoke School building and its Commons lie in a pile of twisted wood and metal.

Inspectors first thought the extensive flood damage could be repaired. But the damage was too great for practical repair.

After state funds, grants and major donations brought in over $5 million, there was only one thing to do: start over with a new 21st-century building appropriate to the culture and heritage of Ocracoke.

A new building will incorporate the still standing elementary building and the gym.

Elevated Environmental Corp. of Reidsville, Rockingham County, won the $174,717 demolition contract. They trucked in a 105,000-pound excavator on a special ferry Wednesday night.

After two weeks of metal and wiring removal and other prep work, the steel jaws of the company’s big Kamatsu monster were ready to eat wooden beams and wall framing for breakfast Thursday morning.

Norman Gower, Elevated’s superintendent, began knocking down walls and roofs at 8:30 a.m. For seven hours, the sounds of wood breaking and joists crunching and popping filled the School Road air.

Teachers, administrators, students, curious villagers and visitors ambled by all day to gaze at the destruction of the building built in 1971. By 4:15, only a big pile of smashed wooden framing and concrete pilings remained of the administration and commons building.

Cole watched as the walls around her former office came crashing down.

“Well, it took a lot of years to get there,” she said. “Today was a hard day. It was the end of an era. Ocracoke School has had a lot of hard days since Sept. 6, 2019, but we are hoping for better days to come.”

The former social studies teacher was nostalgic remembering all the students who have passed through the school’s doors over the past half century.

“That’s the great thing about a pre-K to 12 school,” she said. “You see them when they’re little; you see them walk across the stage. There are lots of great teachers who have made Ocracoke School what it is. I have just really good memories.”

Watching the demolition in-person affected Basnight more than he had expected.

“It’s just a continuation of Sept. 6, 2019,” he said. “It’s necessary for where we want to get to, to improve what we have for the kids and the staff and the people on Ocracoke. It’s just one of those things that has to happen. It’s bittersweet, because we can see the progress, but at the same time, it’s hard to watch.”

His father had showed him this, what was then a one-room schoolhouse back in the 1970s.

“He thought it was a great concept,” Basnight continued. “I don’t think I was even a teenager yet. A lot of these people lived a lot of life in that building. Nevertheless, we’re going to move forward. We’re going to make it better.”

Basnight and high school English teacher Charles Temple noted that a large Blackbeard banner hanging in the commons had been saved for display in the new building, which won’t be the only salvaged items.

“There was some discussion at the first community meeting to save some of the wood from the old commons that we could use decoratively in the entrance space in the new school,” Ben Cahoon, architect for the new building, said. “They saved some really nice beams. It will be a great monument to the school and its history.”

Janet Roberta Licka graduated with six Ocracoke classmates in 1980. The nurse traveled here from Johnston County to visit her mother, an Ocracoke native.

“I went to school in the Methodist Church while this school was being built,” she said Thursday. It’s sad to see it torn down. “Our class was the first one to have our Junior-Senior prom in the new gym (now the multipurpose room), which will be torn down. But you’ve got to move on. Hopefully, the kids will have something better.”

Senior Parker Gaskill was among the students who came by to watch for a bit.

“This is saddening after the hurricane. After all the devastation, this was bound to happen. Now to look at it being crushed. It’s real sad.”

His best memory from the building: “Drinking milk early in the morning and talking to others.”

Kay Riddick taught business and computers at Ocracoke for 29 years.

“I spent 25 years in this building,” she said, pointing toward the demolition.

She came from a high school in Virginia.

“Teaching K to 12 was my biggest impression in coming here,” she said.” I remember all the good people, teachers and students that have been in this building.”

Temple watched the destruction with middle school social studies and health teacher Gwen Austin. “This is awesome,” he said, watching the carnage. “We spent a lot of time together in that building. We hired on together there in 2003.”

Austin noticed her classroom clock was still on the wall.

“I wonder if it still has the right time,” she pondered. The clock showed a few minutes past 9 a.m. Just about right.

Watching from behind the traffic circle, Kelley Shinn said a mural painted by her daughter Cecilia Carter in 2014 was on the backside of Austin’s classroom wall.

“I’m just waiting for them to tear it down,” she said.

The process will be repeated again until the old sections lie on the ground to be hauled to the Dare County Transfer Station in East Lake, or to metal recycling.

After all the debris is removed by the end of November, Cahoon said, the grounds would be “rake ready.” 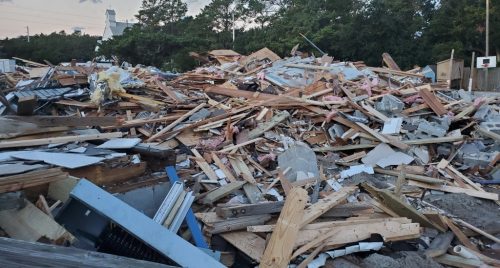