UPDATE: The “Martha’s Vineyard Express” was spotted at the Hatteras village ferry docks on Monday afternoon before it departed at around 3 p.m. for one of the first of many test runs to Ocracoke Island.

Per Tim Hass, NCDOT Public Relations Officer, the passenger ferry will make a number of test trips along the Hatteras-Ocracoke route over the next few days before an official launch date is determined.

Ocracoke moved one port closer to getting a passenger ferry today when the “Martha’s Vineyard Express,” a catamaran-style passenger ferry, was seen this morning docked in Currituck County.

The ferry, owned by Seastreak out of Atlantic Highlands, New Jersey, stopped at the Coinjock Marina Sunday on its way to the Outer Banks, said Sam Walker, a Coinjock resident. He talked to the passenger ferry crew, who had stopped there to refuel and have lunch.

“They said they signed the contract on Monday,” Walker said.

The propeller-driven boat sits pretty high out of the water, he noted.

No further information was available Sunday, but this is the ferry the N.C. Department of Transportation sought to rent for Ocracoke this season. The walk-on boat will travel between the Hatteras ferry terminal and Ocracoke Village.

John A. Torbett (R-Gaston) had told the Observer that while in budget meetings in early April, he asked Secretary of the Department of Transportation James Trogden to pay for leasing a passenger ferry for Ocracoke out of his budget.

Torbett, who is chair of the House Transportation Appropriations Committee, said the 102-day rental of the 147-seat vessel will cost $867,000, including two crew members but not including fuel.

The propeller-driven “Martha’s Vineyard” is a two-deck catamaran-style aluminum boat built in 2005.

Torbett had said in April that the rental period would be from May 24 to Sept. 22, but the N.C. Ferry Division was cautious as spokesman Steve Abbot said on April 26 that no dates have been set.

“The ferry we expect to use will be traveling to the Outer Banks in early May (we don’t have a set date for the trip) to do test runs in the Pamlico Sound,” he had said in an email. “If those are successful, as we hope and expect, then a contract can be finalized and signed. The timeline for all of that to happen will determine what specific date the service can start.”

Once the service starts, the “Martha’s Vinyard” crew will be joined by ferry employees.

Infrastructure, such as passenger shelters, dockage and even trams for Ocracoke Village, is already in place in anticipation that the “Ocracoke Express,” being built in Swansboro, would be ready in the spring of 2018.

The N.C. Dept. of Transportation in 2017 awarded a $4.15 million contract to Armstrong Marine Inc. in Swansboro to build the new boat, but Armstrong is now U.S. Workboats.

Last June, the Ferry Division announced that the new boat was taking longer to build than planned.

Citing the lack of welders, the Ferry Division said the boat would not be ready for the tourist season.

This year, work on the vessel stopped on Feb. 19 after a report from Elliott Bay Design Group, Seattle, Wash., who designed it, identified “several issues with the construction, among which were many of the aluminum welds,” Ferry Division Spokesman Tim Hass had said.

“That project is ongoing,” Abbot had said about the new boat.

Peter Vankevich contributed to this story. 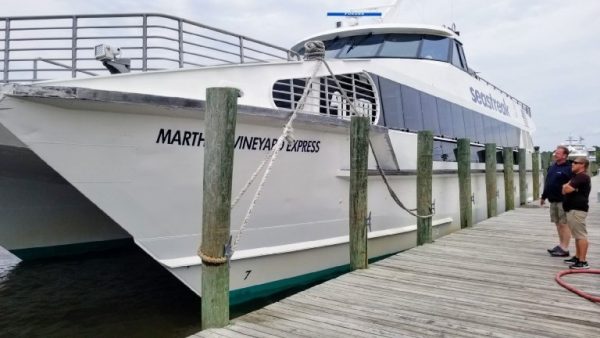