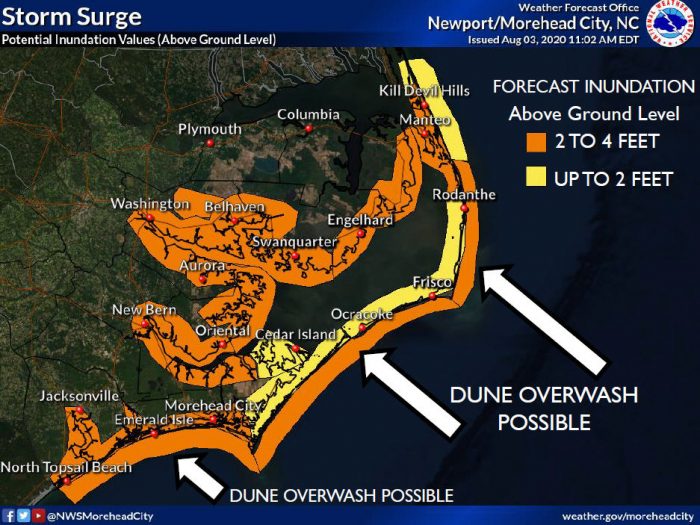 There were no major changes to the projected path of Isaias as of Monday evening, and tropical-storm-force winds are expected to reach the Outer Banks this evening, (with the potential to bring ocean and soundside flooding), per the most recent update from Dare County Emergency Management, and the National Weather Service (NWS) Newport / Morehead City office.

Per Dare County, now is the time to make final preparations. Secure all outdoor furnishings, trash cans, and any loose items.

Ocean overwash of 2-4 feet above normally dry ground is anticipated in vulnerable areas on Hatteras Island, and N.C. Highway 12 may be affected. As of 6:30 p.m., however, the highway was clear and passable throughout both Hatteras Island and Ocracoke Island.

With the risk of tornadoes for our area, be sure to have multiple ways to receive warnings. Keep your cell phone charged and turned on before you go to sleep. Be sure your wireless emergency alerts are enabled. If you receive a tornado warning, take action – shelter on the lowest floor in an interior room or hallway away from windows. For more information, visit http://ready.gov/safety/tornado.

Dare County Offices north of Oregon Inlet will be open on Tuesday, but offices on Hatteras Island will remain closed.

Storm surge and oceanfront erosion remain a concern for both Hatteras and Ocracoke islands, and storm surge inundation of 2-4 feet above ground is still possible, per the Monday evening update.

There is the potential for several tornadoes across Eastern North Carolina, which includes the Outer Banks region, and rough surf and a high risk of rip currents will likely linger through the middle of the week.

As of 5:00 p.m. on Monday, the center of Tropical Storm Isaias was located by NOAA Doppler weather radars near latitude 32.0 North,  longitude 79.4 West, or approximately 60 miles SSE of Charleston, S.C.

Isaias is moving toward the north-northeast near 16 mph (26 km/h), and this general motion accompanied by a  gradual increase in forward speed is expected through tonight followed by a further increase in the forward speed on Tuesday.

On the forecast track, the center of Isaias will approach the coasts of northeastern South Carolina and southern North Carolina within the hurricane warning area this evening.

The center will then move inland across eastern North Carolina early Tuesday morning, move along the coast of the mid-Atlantic states on Tuesday, and continue across the northeastern United States Tuesday night.

Data from NOAA Doppler weather radars indicate that maximum sustained winds are near 70 mph (110 km/h) with higher gusts. Some strengthening is forecast later this afternoon or early evening, and Isaias is expected to make landfall tonight at or near hurricane strength along the coast of northeastern South Carolina or southern  North Carolina. Only gradual weakening is anticipated after Isaias makes landfall in the Carolinas, and then moves across the mid-Atlantic region tonight and Tuesday.

Tropical-storm-force winds extend outward up to 125 miles (205 km) from the center. 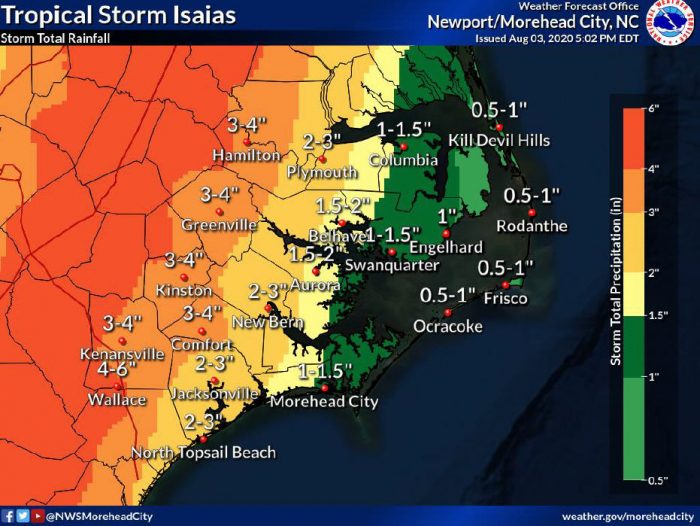 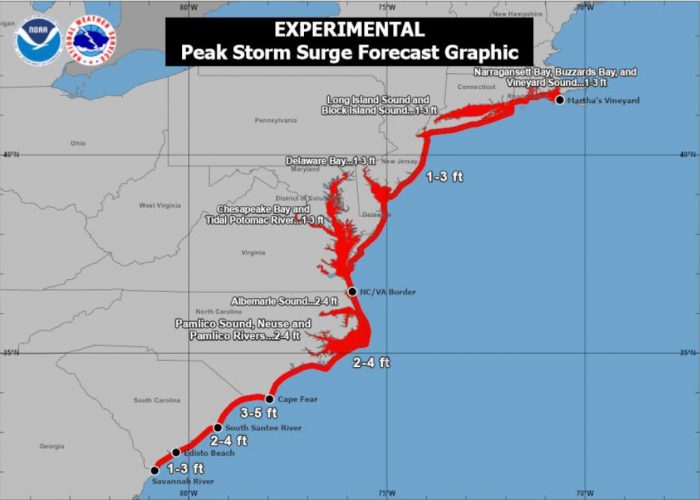 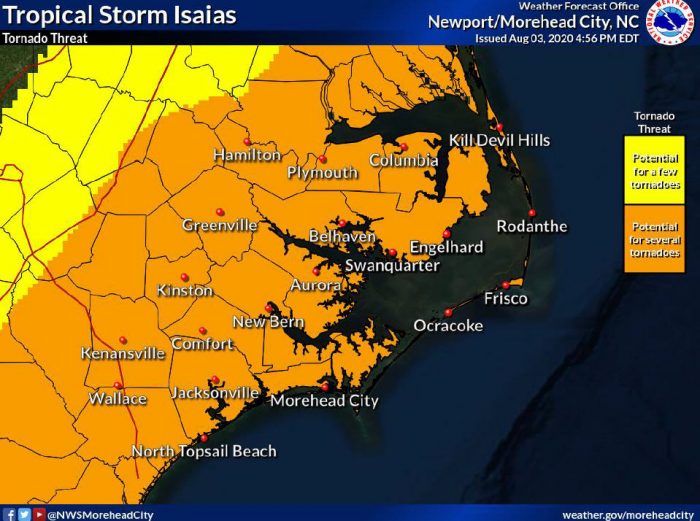 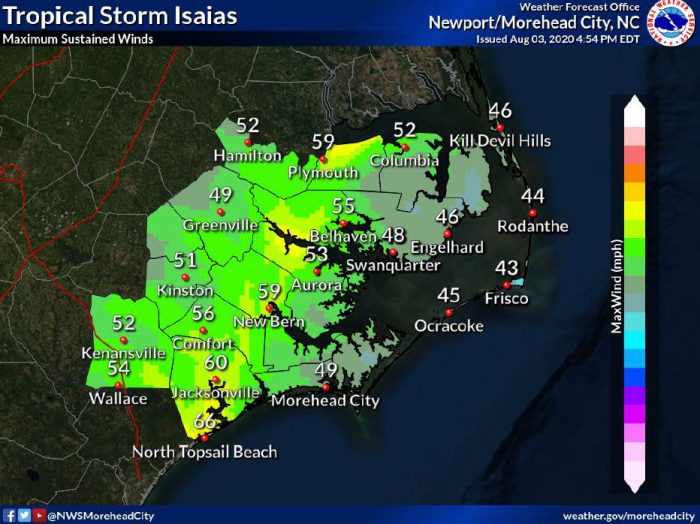 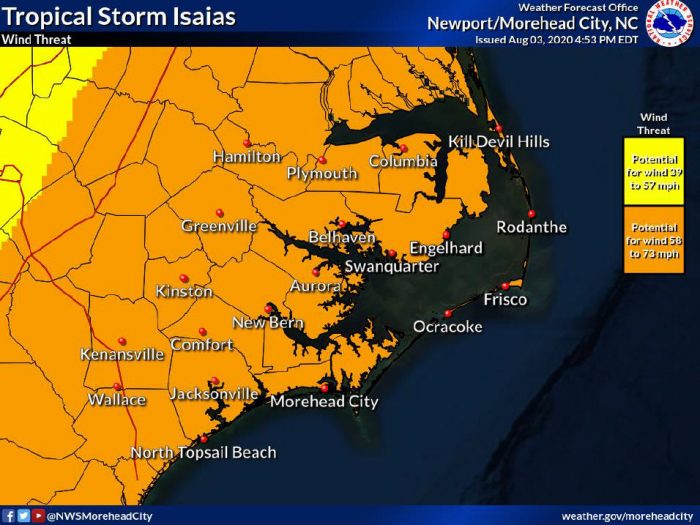 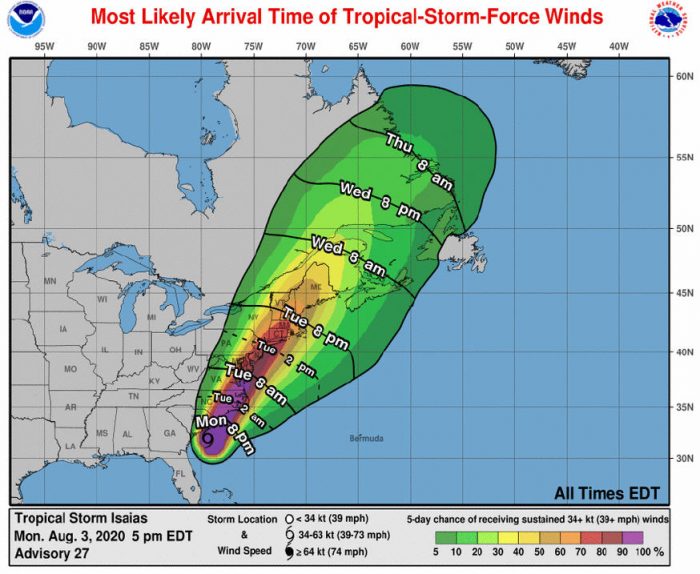 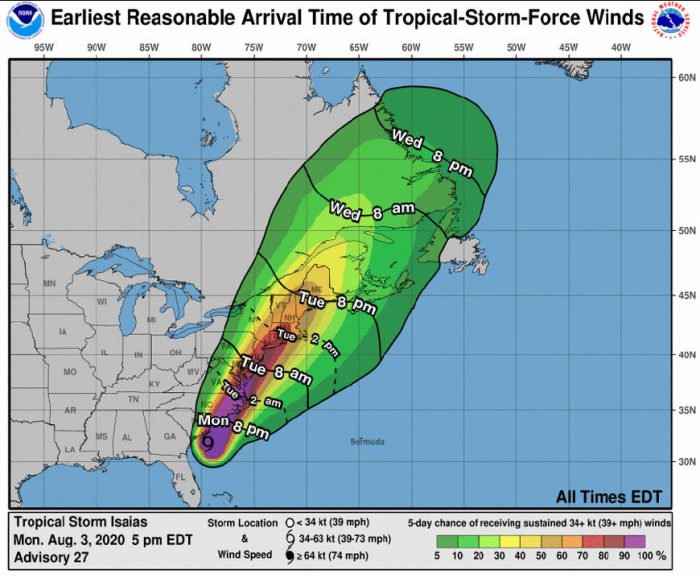