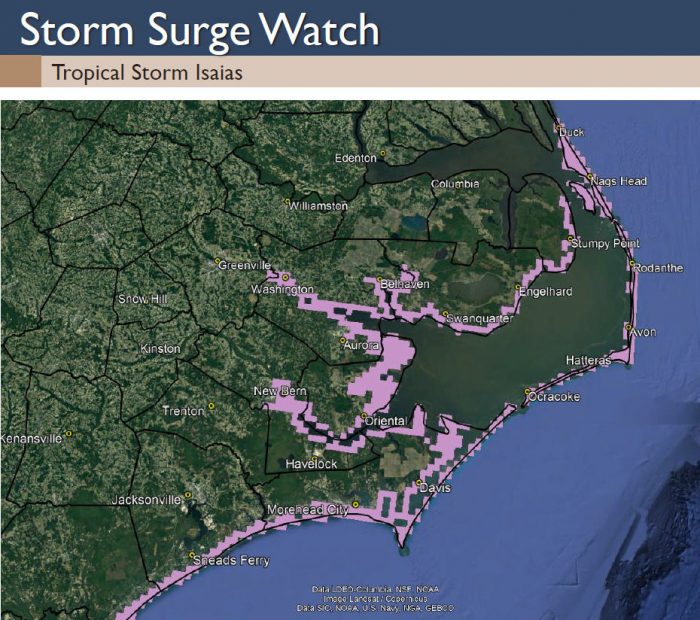 After multiple days of uncertainty, confidence is now high about the eventual timing and intensity of Tropical Storm Isaias, per a Sunday evening update from the National Weather Service (NWS) Newport / Morehead City office.

Storm surge and oceanfront erosion remain a concern for both Hatteras and Ocracoke islands, and storm surge inundation of 1 to 2 feet above ground, (with localized inundation of up to 3 feet), is possible.

The highest storm surge impacts are expected from Rodanthe south through Cape Lookout, and will likely occur from Monday night through Tuesday. Depending on the effects of the storm, N.C. Highway 12 may be impassable during this timeframe.

Though minor ocean overwash was reported on Ocean View Drive in central Avon on Saturday evening, and some ocean water was reportedly affecting N.C. Highway 12 north of Hatteras village as of Sunday evening, Highway 12 was clear and passable throughout both Hatteras and Ocracoke islands as of 6:30 p.m.

Rough surf and rip currents were reported throughout Sunday, and the rip current risk will likely remain high through the middle of the week.

Hatteras and Ocracoke islands are forecast to see maximum wind gusts in the 50-60 mph range, and maximum sustained winds of 40-45 mph on Monday evening and Tuesday, per the NWS Sunday evening update.

As of 5:00 p.m. on Sunday, the center of Tropical Storm Isaias was located by an Air Force Reserve reconnaissance aircraft and NOAA Doppler weather radars near latitude 27.8 North, longitude 79.8 West, (or about 410 miles south of Myrtle Beach, S.C.),  and Isaias was moving toward the north-northwest near 9 mph.

This general motion is expected to continue through tonight, and a turn toward the north and north-northeast along with an increase in forward speed is anticipated on Monday and Tuesday.

Data from the aircraft and the Melbourne, Florida, Doppler radar indicate that maximum sustained winds have increased to near 70 mph (110 km/h) with higher gusts.  Some fluctuations in strength will be possible during the next 36 hours, but Isaias is expected to be a strong tropical storm when it reaches the coast of northern South Carolina and southern North Carolina Monday night.

Slow weakening is forecast after Isaias makes landfall in the Carolinas and moves across the U.S. mid-Atlantic region late Monday and Tuesday.

Tropical-storm-force winds extend outward up to 115 miles from the center. A weather station at Sebastian Inlet, Florida, recently measured a wind gust of 49 mph (80 km/h). 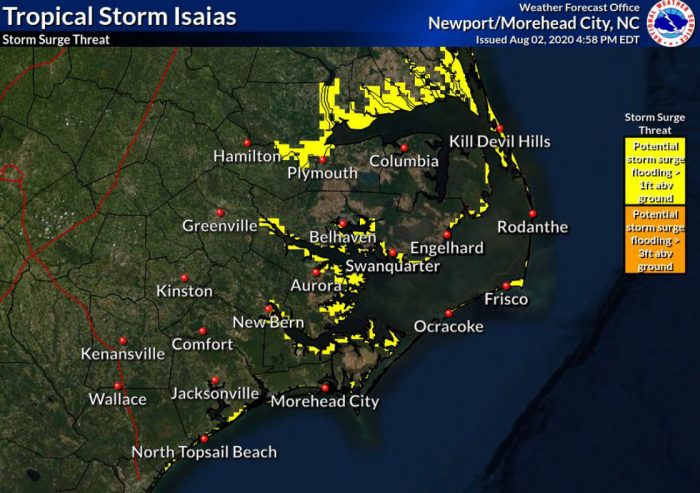 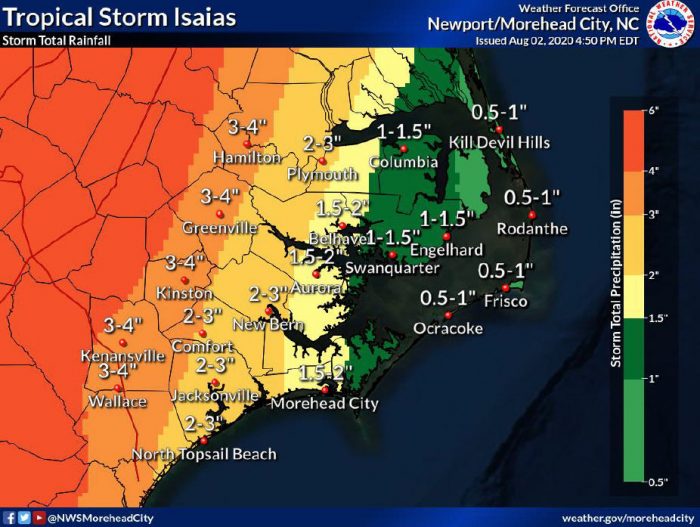 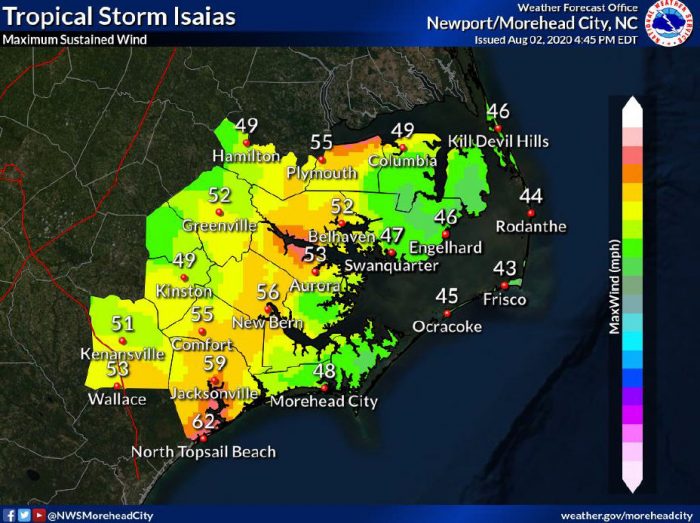 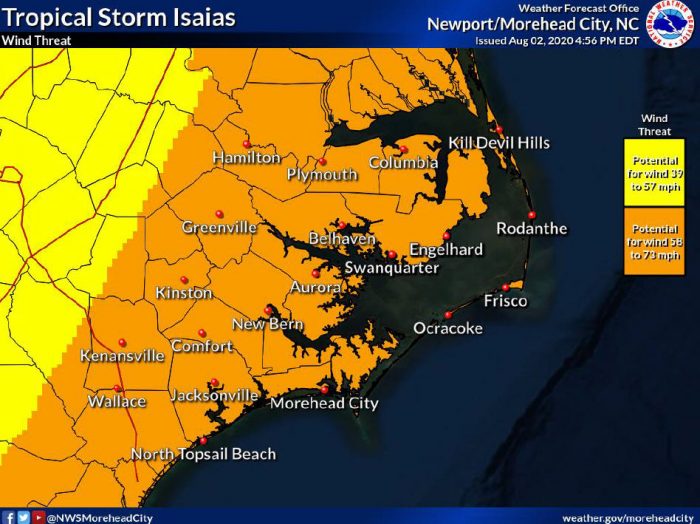 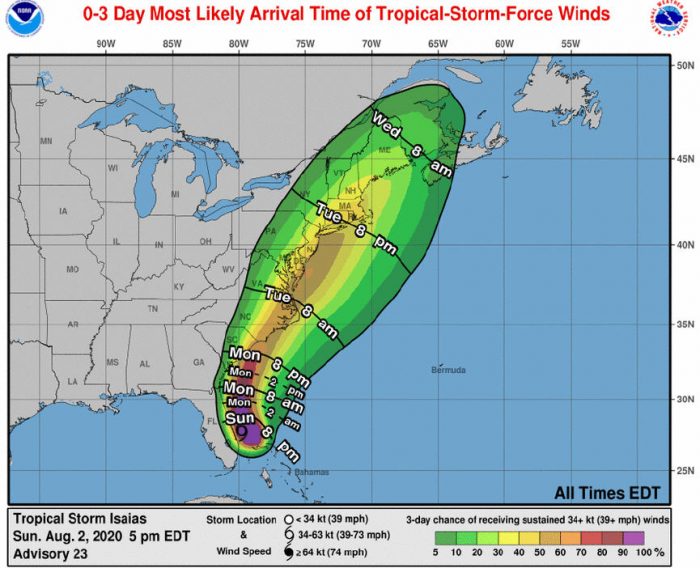 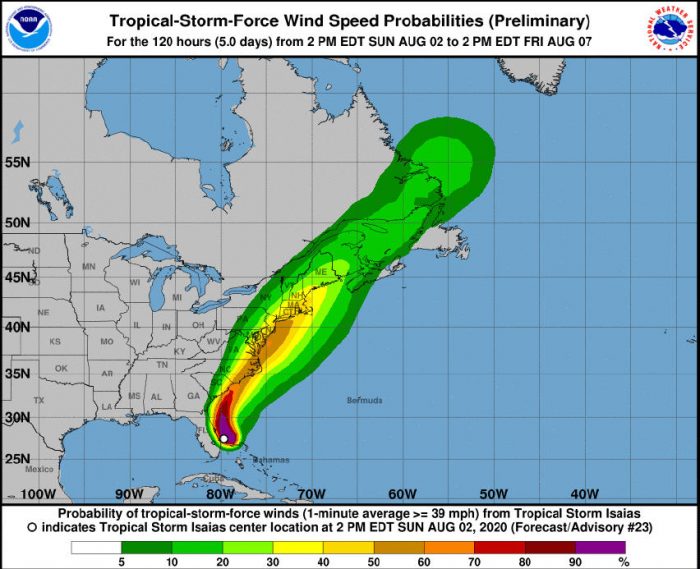 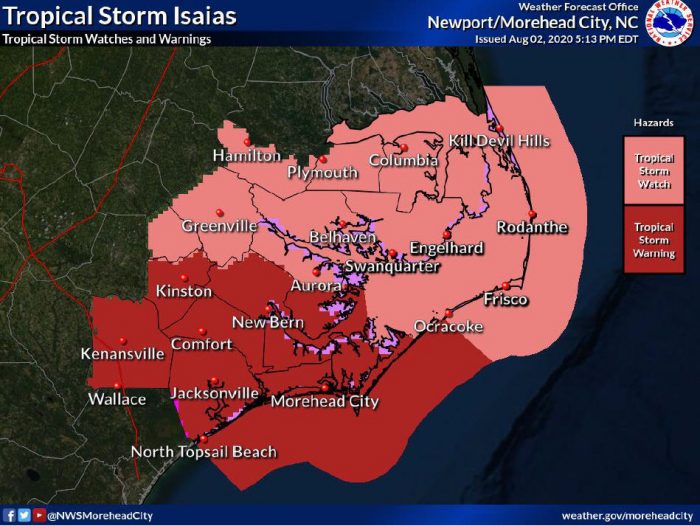