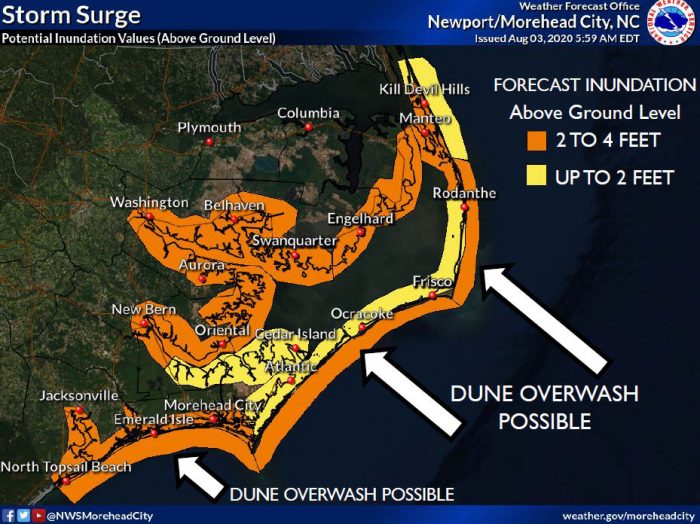 A Tropical Storm Warning has been issued for the Outer Banks, and the possibility of storm surge has increased from 1-3 feet to 2-4 feet above normally dry ground, per a Monday morning update from the National Weather Service (NWS) Newport / Morehead City office.

Storm surge and oceanfront erosion remain a concern for both Hatteras and Ocracoke islands, and storm surge inundation of 2 to 4 feet above ground is possible.

Highway 12 was clear and passable throughout both Hatteras and Ocracoke islands as of 6:30 a.m. on Friday.

A Tropical Storm Warning is in effect for the Outer Banks, and a Storm Surge Watch is in effect south of Duck, including the Pamlico Sound, per the NWS update.

There is the potential for several tornadoes across Eastern North Carolina, which includes the Outer Banks region. The public is advised to have multiple ways to receive warnings, especially overnight.

Rough surf and a risk of rip currents will likely remain high through the middle of the week.

As of 8:00 a.m. on Monday, the center of Tropical Storm Isaias was located by an Air Force Reserve reconnaissance aircraft and NOAA Doppler weather radars near latitude 30.2 North, longitude 80.1 West, or about 100 miles east-southeast of Jacksonville, Florida.

Isaias is moving toward the north near 13 mph (20 km/h). A turn toward the north and north-northeast along with an increase in forward speed is expected later today and Tuesday. On the forecast track, the center of Isaias will pass well east of the Georgia coast through this morning. The center of Isaias will then approach the coast of northeastern South Carolina and southern North Carolina within the hurricane warning area later today.

The center will then move inland over eastern North Carolina tonight, and move along the coast of the mid-Atlantic states on Tuesday and into the northeastern United States by Tuesday night.

Maximum sustained winds are near 70 mph (110 km/h) with higher gusts. Some strengthening is anticipated today, and Isaias is forecast to regain hurricane strength before it reaches the coast of northeastern South Carolina or southern North Carolina tonight. Slow weakening is forecast after Isaias makes landfall in the Carolinas and moves across the U.S. mid-Atlantic region tonight and Tuesday.

Tropical-storm-force winds extend outward up to 125 miles (205 km) from the center. 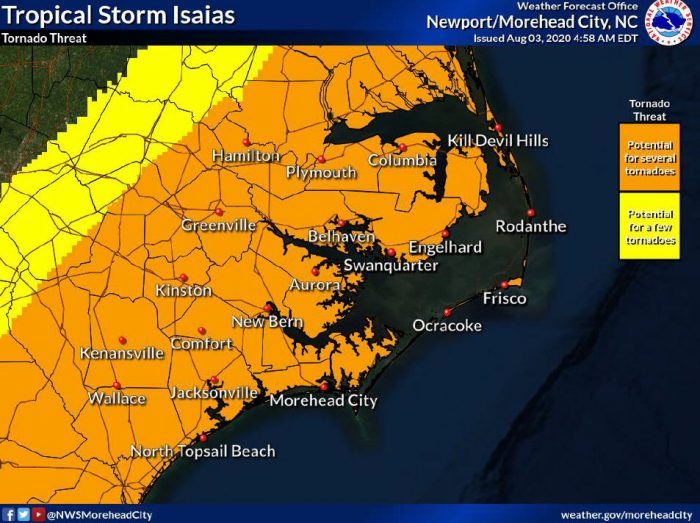 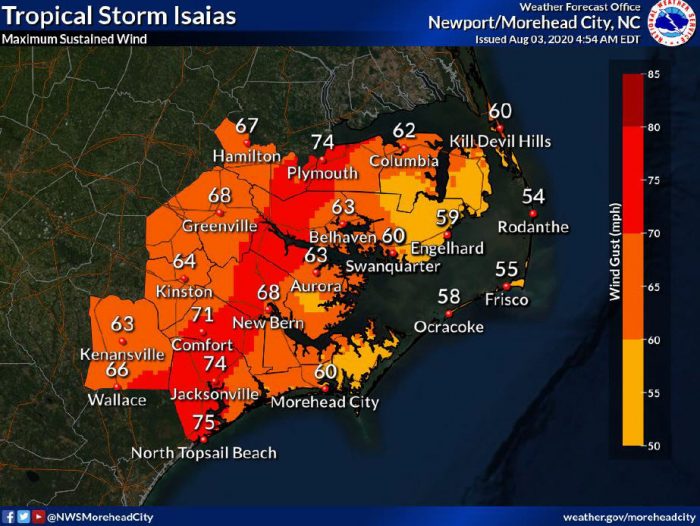 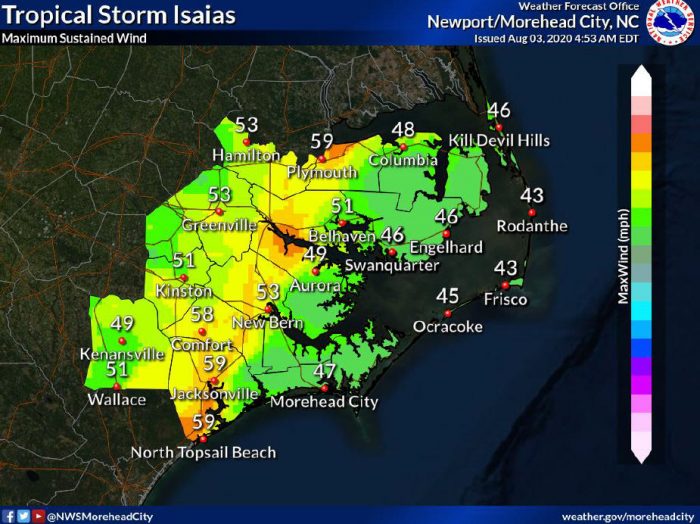 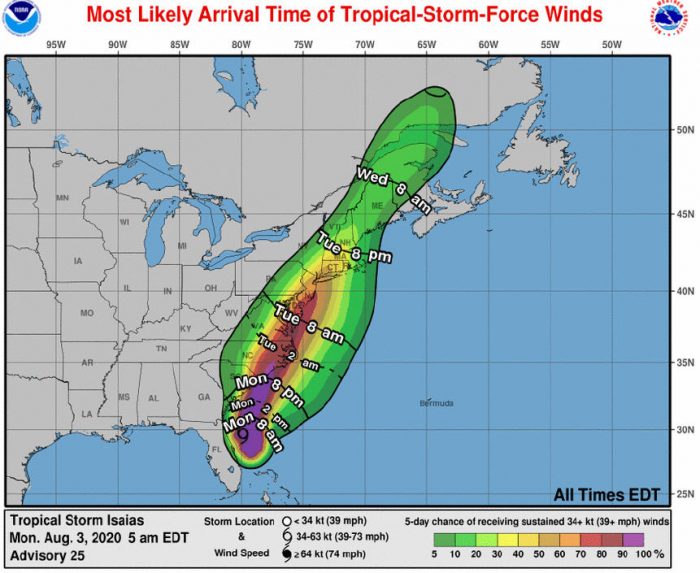 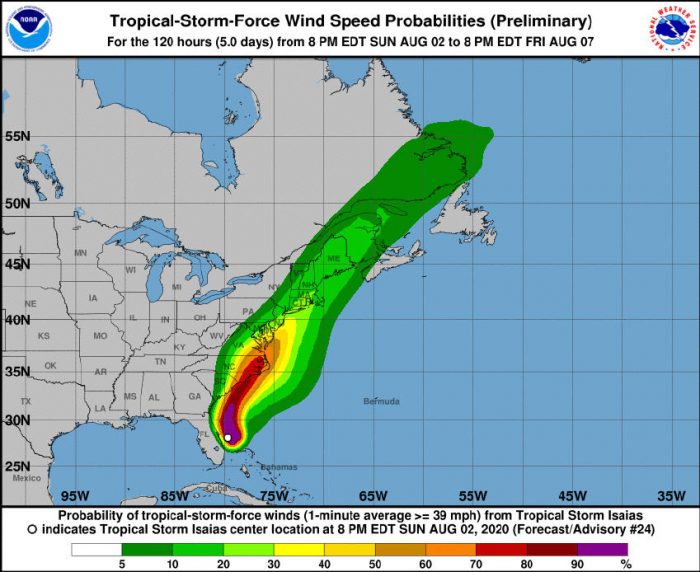 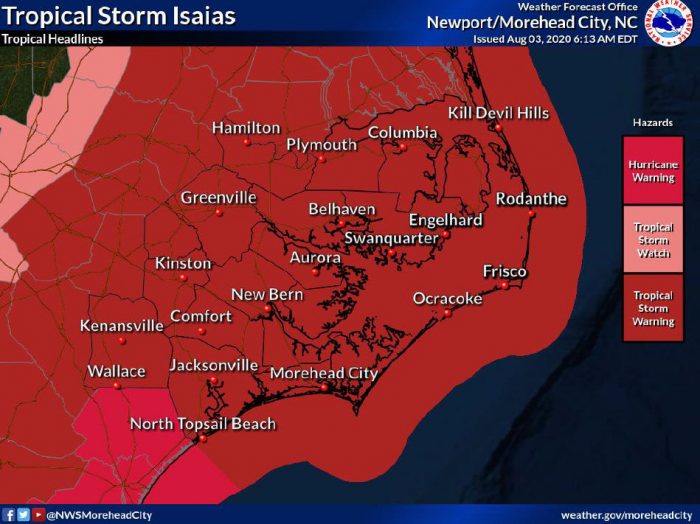 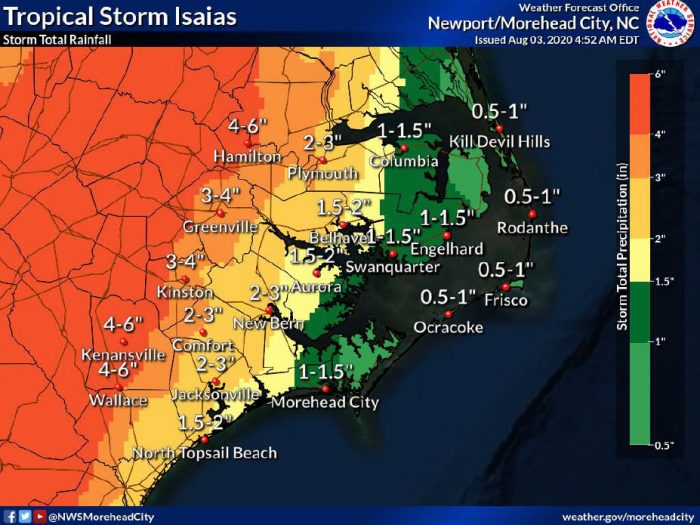