After several days of plugging away at the shoaling in Big Foot Slough, the U.S. Army Corps of Engineers has initiated a tag-team approach with two dredges.

The ACE on Friday received approval for the emergency operation of dredging to the immediate west of the federal channel through which both the Cedar Island and Swan Quarter ferries traverse to get to and from Ocracoke.

The severe shoaling in Big Foot Slough just outside Ocracoke forced the suspension on April 7 of the Pamlico Sound ferries. Resumption of these ferry runs began Tuesday (April 13).

Since these are under federal control (rather than state), the ACE is tasked with conducting the dredging. Shoaling occurs when sand and sediment fill into a ferry channel making water depths too shallow and the channel too narrow for safe operation of the ferry system’s vessels.

Both the side caster dredge Merritt and the hopper dredge Murden are working in the slough and also at the north end of Ocracoke in the South Ferry channel, but at different times.

This channel, which used to be near the old “short route,” benefits commercial and recreational fishing boats and the Coast Guard on their way out into the ocean, Dare County Project Manager Brent Johnson said.

Dredging is done to both widen and deepen these channels, said Todd Horton, chief of waterways management.

“The Merritt is better at widening the channel and the Murden is better for deepening channels,” noted Peterson. “We’re hitting it with everything we got.”

On Friday, the ACE received emergency approval to dredge outside the federally authorized area. (See notice at end.)

As seen on the graphic above, the straight line of hash marks is the current federal channel, and it is blocked by a huge amount of sand, shown in shades of red. In that red area, the water depth is about three feet and ferries need at least 10 feet of water.

But a new line of hash marks, labeled on the graphic as an alternate channel, is shown going around this red area.

That is the area where the ACE has received approval to dredge, Horton said, and that area has eight feet of water. The emergency order is seeking to dredge to 10 feet with possibly two feet more.

As for width, the minimum width for ferries to be able to pass safely is 100 feet, Horton said. Right now, the channel is only 85 feet wide, he said, and they will try to get it to 150 feet.

Big Foot is a federal channel, but a deeper, natural channel to the west, called Nine Foot, would possibly better serve Ocracoke.

But that channel would have to receive federal designation, which takes an Act of Congress.

The Merritt last dredged Big Foot in October, thanks in part to a cash gift from Carteret County.

This year, the ACE has more than $1 million to dredge Big Foot thanks to a higher budget for the ACE, which was mentioned in the December Ocracoke Waterways Commission meeting, and an additional half million thanks to U.S. Rep. Greg Murphy.

A Waterways Commission meeting is scheduled for 5:30 p.m. Tuesday, April 20, virtually on Facebook on the Hyde County Public Information page. 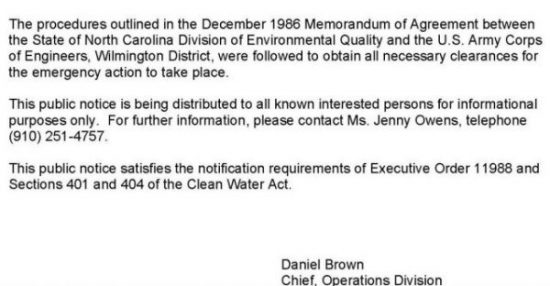