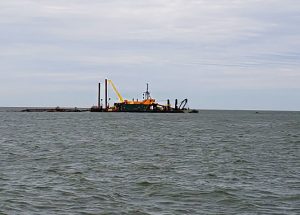 If navigational channels are akin to highways on Ocracoke Island, then dredges are its version of snow plows in the mountains. Both may be subject to whims of wind and weather, but with constant bureaucratic and funding hurdles, an operator can’t just pull a dredge out the garage and start work.

Reduction in ferry service on the Pamlico Sound between Cedar Island, Swan Quarter and Ocracoke had to be implemented last month because of “critical shoaling issues” in the ferry channel just outside Sliver Lake Harbor, according to the North Carolina Department of Transportation’s Ferry Division. After Hurricane Isaias passed offshore the island in early August, shallow water in the Bigfoot Slough channel forced further reduction to a one-boat-at-a-time schedule.

The last survey in mid-July showed water depths in Bigfoot Slough as low as eight feet. The conditions make it too dangerous for the system’s two largest sound-class vessels, the M/V Swan Quarter and the M/V Sea Level.

Even though the remedy would be to do relatively minor dredging, that is easier said than done. The shoaled area is within a federal channel, but it is outside the regular maintenance area. Plus, the ferries transiting the channel are state-owned and operated.

“We’re trying to get permission to dredge outside the fixed channel with the (Army Corps side cast dredge) the Merritt in the deep water,” Brent Johnson, county grants and waterways project manager, told the Dare County Waterways Commission at its remote meeting on Monday.

But there are plans in the works that could eventually make it easier to get work done.

In an Aug. 5 press release issued by NCDOT, the agency said it “has urgently requested the Corps to perform emergency dredging operations in the area, calling the channel ‘an essential supply chain for commerce, tourism and goods for Ocracoke Island.’”

As members of the commission know all too well, the current shoaling problem is just the most recent example of ongoing issues with sand – too much or not enough – that have affected the Ocracoke ferry routes, which run between Dare, Hyde and Carteret counties.

Other navigational challenges have worsened in Hatteras Inlet. One particularly persistent issue centered on a lump of sand in the South Ferry Channel, between Ocracoke South Dock and the Inlet Gorge, that is used as a short cut by recreational and charter fishing vessels to get to and from the ocean. A quirk in jurisdictional authority had made it impossible for the Army Corps to use its funds to maintain that part of the channel, which had earlier been called the “connecting channel.” Although a subsequent agreement between Dare County, the state and the Army Corps now allows county and state-funded projects, other issues with weather and missed deadlines have frustrated regular maintenance.

A long-delayed project in South Ferry Channel is now under way, with the Corps’ Merritt clearing the shoaled spot. Johnson said that a request has been made to the state to extend the permit until Aug. 24 because dredging had to be stalled until the storm passed.

The work had been expected to have been done earlier in the summer by the state dredge Manteo, but the machine had several problems that required repair.

Lance Winslow, NCDOT’s assistant director for marine assets, told commissioners Monday that the Manteo was still in the shop, and it was unclear when the vessel would be available.

“Right now, we don’t have any money,” he said, referring to the agency’s current budget shortages.

A historic Hyde County fishing village with about 900 year-round residents, Ocracoke is a popular resort community accessible only by boat, ferry or small aircraft.

The free ferry between Hatteras and Ocracoke villages – the state’s busiest ferry route – transits Hatteras Inlet, which was relatively stable and problem-free until Hurricane Isabel ripped through the area in 2003. Since then, the spit at the tip of Hatteras Island that had buffered the inlet from the ocean has been eroding at an alarming rate, although it started years before.

In 1993, the inlet between Hatteras and Ocracoke islands was one-quarter mile wide. Today, it is 2.3-miles wide, Johnson said.  According to the Corps, between 2002 and 2016, the Hatteras spit has eroded about 7,200 feet.

As the land eroded away, more sand made its way into the inlet. In recent years, the ferry route had to be changed to a longer U-shaped route to avoid persistent shallow shoals, increasing the time each way to an hour between the islands. The short channel is still being monitored, but conditions have yet to improve enough.

Yet, on the north end of Ocracoke Island, there has been severe erosion by the South Ferry Docks where the Hatteras ferries come and go. A sheet pile bulkhead has recently been installed to buffer the shoreline by the ferry basin. In contrast, the sand has piled up in Bigfoot Slough on the other side of the island, where the ferries come and go to Swan Quarter and Cedar Island.

As the commission continues to grapple with whatever Mother Nature doles out, there have been encouraging steps to long-term solutions. Contractor Coastal Protection Engineering is working to develop a two-part dredge material management plan for waterways in the north and south ends of the county that would provide reliable disposal sites for dredged sand. Dredging projects will not be permitted unless there is an approved disposal area for the material. But Dare County has been running out of acceptable areas, especially around Hatteras Island sites.

Also, the Corps of Engineers has agreed to explore realignment of the authorized federal channel in Hatteras Inlet – a long sought goal of the Waterways Commission.

Johnson said that it would involve changing the authorization language that restricts how “best water” or “best route” are defined in the federal channels. It would a way to sidestep the cumbersome and lengthy process of securing Congressional legislation that is required to change authorization.

The wording would determine the flexibility of the alignment in the future, he said.

If the change was made – which could take about 18 months to complete – it would affect the Barney Slough, South Ferry Channel and Sloop Channel.

What it won’t do is re-open the former and less time-consuming Hatteras-Ocracoke ferry route.

“I’d rather have the short route,” said commission chairman Steve “Creature” Coulter after the meeting. “But I want a route that’s maintainable.”