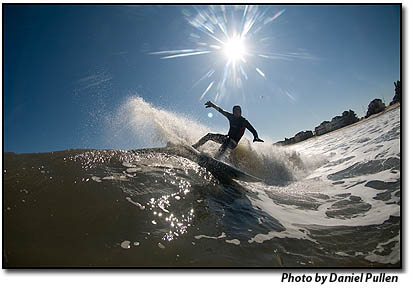 There was a lot of swell on the ocean this winter – more so than in the past few years. But a lot of times there was too much swell to surf with the northeasters that came through on an almost weekly basis in January and into February.

However, that wasn’t the news headline about winter surfing.  That big news is that ocean temperatures were cold – really cold.

The ocean was either flat or had 6-foot, really heavy waves, which is not good when the water temperatures are in the high 30s to low 40s.

In the dead of winter, you are probably looking at a tight-knit group of only 10 to 15 really dedicated locals who brave the surf.  Occasionally, we get a few folks from the northern beaches or Virginia.

I started surfing through the winter when I was a senior in high school, and this was the coldest and most brutal winter weather that I can remember.

The average water temperature in the winter is in the low 40s. The temperature usually dips into the upper 30s for about a week or so. However, this winter it dipped to 38 or 39 degrees for about four straight weeks.

You usually need a 5/4/3 wetsuit with a built in hood in the winter.  The numbers refer to the thickness of the wetsuit in millimeters. Thicker is warmer, but thicker also restricts movement.

Most of the photos that I took in the water this winter were in a water temp of about 43 to 45 degrees. At one point, I thought that I had frostbite in one of my fingers.

I am glad that spring finally seems like it has set in. I was really getting tired of putting on all the rubber to get in the ocean.

Here’s to spring and to warmer water. Hopefully, we will get a handful of days of surf before we get into summertime flat spells.

Coastal Review Online is featuring the research, findings and commentary of author Kevin Duffus. Second of three parts It happened about 10 weeks before the second of Walter Raleigh’s three expeditions to establish an English colony on the North American continent arrived at Ocracoke Inlet in 1585. The expedition of seven ships was led by [...] Island Features |  Full Article

Per a recent update from the Cape Hatteras National Seashore, all off-road vehicle (ORV) permit holders will be required to display proof of permit on their windshields or dashboards starting on Monday, July 20. For a limited period of time, the Cape Hatteras National Seashore (CHNS) accepted proof of ORV permits on mobile devices for [...] Seashore News |  Full Article

At a press conference on Tuesday afternoon, Governor Roy Cooper announced that public schools for grades K-12 could reopen in August with extra safety precautions, as well as the option for children to either attend in-person or stick to remote learning. “In the spring, when this pandemic broke out, we made the difficult decision to [...] Local News |  Full Article

Coastal Review Online is featuring the research, findings and commentary of author Kevin Duffus. First of three parts Pamlico Sound is traversed each day by innumerable people aboard ferries, fishing boats and sailboats. Most, however, probably don’t consider or are even aware of the intrepid explorers who first circumnavigated the vast estuary for the purposes [...] Island Features |  Full Article

Dare County released the following COVID-19 update for Tuesday, July 14, which details the county’s most recent active cases, testing efforts, and additional community information. The number of positive COVID-19 tests in Dare County is 215, 58 of which are considered active. Of the 215 cases, 124 are residents and 91 are non-residents. The majority [...] Local News |  Full Article

(Governor’s office) North Carolina Governor Roy Cooper is scheduled to announce his plans for re-opening the state’s public schools at 3 p.m. on Tuesday, July 14, according to a schedule released by his press office. The governor had postponed a decision originally scheduled for July 1 on how to begin the next school year. The [...] Local News |  Full Article

Registering to vote in Dare County is easy and convenient. Learn the different ways you can register. Your vote matters! Register now at DareNC.com/RegistertoVote.