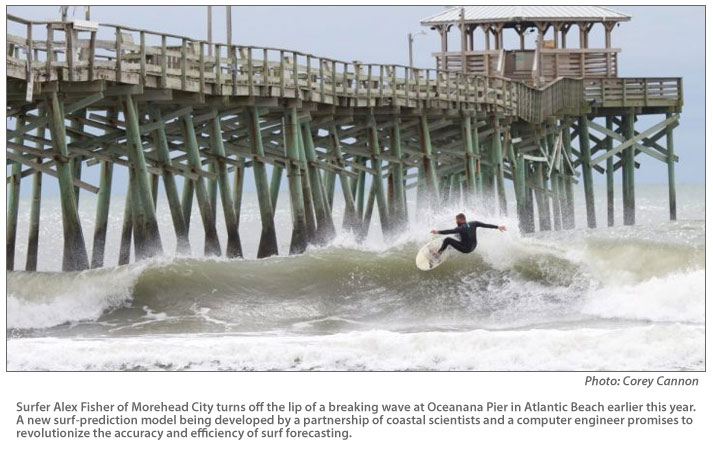 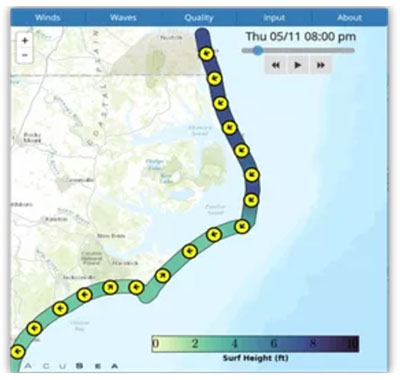 Surfing and science has always been a relationship of convenience, if not necessity. But when surfers are scientists who are wizards at interpreting ocean data, the art of finding good waves can be transformed into scientific certainty – or close to it.

A new surf-prediction model developed by a partnership of two coastal scientists and a computer engineer promises to revolutionize the accuracy and efficiency of surf forecasting, long regarded as notoriously challenging and unreliable. Known as AcuSea, the service crunches decades of publicly available wave and beach data with data on current conditions at different surf spots.

“We’ve combined our wave analysis skills with 35 years of observation, and just a blinding passion for surfing,” said Jeff Hanson, a retired oceanographer who worked at Johns Hopkins University and the U.S. Army Corps of Engineers Field Research Facility in Duck.

A demonstration of the brand-new model is currently being tested and reviewed by 25 volunteers, most on the Outer Banks, Hanson said.  The full site, which is not yet available to the public, allows users to click on 120 locations from Virginia Beach, Virginia, to Wrightsville Beach.

Details for five days out are provided through a table or graphics on tides, wind, waves and the site provides a 1-10 rating on the quality of the surfing.  All is great with the software interface, Hanson said, but not so with the flat ocean conditions.

“So far, people really seem to really like it, but we’re waiting for some really big surf events,” he said. “We want to test the full dynamic range of conditions that the Outer Banks experiences to see that the forecast works.”

After there are two or three big events to test the site, “we’re good to go,” he said. Then Hanson and his partners – computer engineer Bob Fratantonio, who works at environmental consulting firm RPS ASA in Rhode Island, and a surfer/scientist who prefers to remain anonymous – will decide whether to partner with an existing provider of weather information or develop their own site from scratch.

Whatever is decided, Hanson said, the partners are confident that they’ve got a unique product that has harnessed tons of science to create a vastly better forecast model.

“A lot of our competitors have five-day predictions, but they’re just not accurate,” Hanson said. “The burden on us is to provide the proof, and we’ll do that.”

Hanson, 58 and dubbed “Wave Man” by some of his surfer buddies, moved to the Outer Banks in 2003, right after Hurricane Isabel ripped through the barrier islands. He worked for 12 years at the Corps’ Duck pier, where his specialty was primarily analysis of the ocean wave field. In 2008, he launched WaveForceTechnologies, which Hanson said develops software and provides consulting services to support “basically anything you want to build or move or use in the ocean.”

What AcuSea does is take the same laws of physics that govern waves everywhere and layer that knowledge on details of the actual beach. So the model is easily expandable to different geographic regions.

“We’ve come at this from a completely different angle,” Hanson said.

They use a computer model that is faster and more efficient, allowing a much wider range. They assimilate mostly ignored data from National Oceanic and Atmospheric Administration and Army Corps buoys. They then combine that data with their wave analysis technique to develop a wave-assimilation approach.

“I’m pretty excited about it,” Hanson said. “I spent my whole 30-year career developing this software (called X Waves) and those tools are ideally suited now for making this leap.”

A really different feature AcuSea offers, Hanson said, is ranking what he calls “the fun factor” in surfing. With the 1-10 scale of surf quality, epic waves are a “10” and glassy flat a “1.”

“There’s a lot of different factors that influence how much fun the surfing will be on a given day,” he explained. “The wave properties: height, period and direction, the slope of the beach, the shape of the beach, also the wind conditions.

“You can have the best, most perfect wind, but if you have a strong onshore wind coming in, it can totally destroy the conditions. “

Hanson has been providing wave analysis for years to obxsurfinfo.com, an Outer Banks-based surf-forecasting site.  But Brent Nultemeier, one of the site’s owners, said he appreciates the potential for AcuSea to improve surf forecasting.

“I think it’s cutting edge,” Nultemeier said. “There’s only a handful of companies out there doing this, and the accuracy is pretty low.”