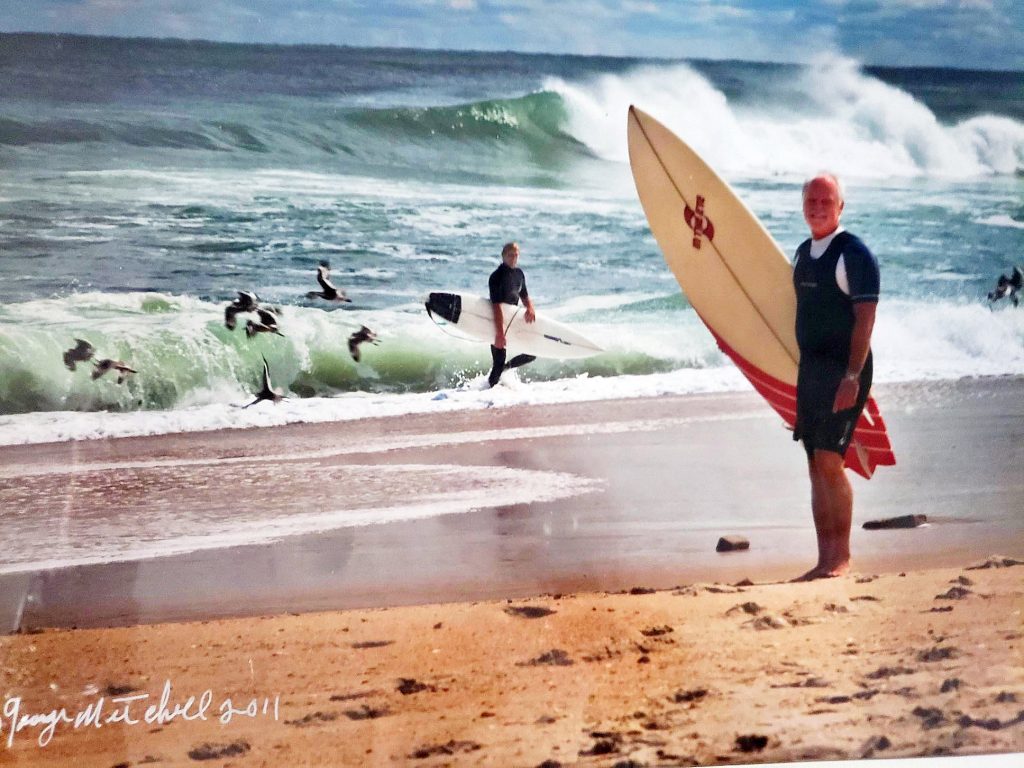 The first-ever Ray Gray Classic Surf Competition is hitting the beach on Sunday, April 28, and the community-oriented event has the potential to do a world of good for the local Cape Hatteras High School (CHSS) Surf Club, while being a fun opportunity for spectators to check out the local surfing talent.

The surfing competition is named in honor of Ray Gray, a retired teacher / principal of the Cape Hatteras school system, and a famous local surfer who helped to keep countless students balanced between academics and surfing. Gray suffered a severe brain injury in 2014, but is still a living legend for islanders of all demographics, (including and especially surfers), and is a fixture in the local community.

“When we started brainstorming the idea of hosting a community contest that would involve members of the Surf Club and alumni / community members of Cape Hatteras, Ray Gray was the first person to come into mind to tribute the contest to,” said Clayton Tiderman of the CHSS Surf Club.

Featuring a total of 42 surfers divvied into 21 teams, (which includes several father and son pairings), the tournament participants will include a combination of current CHSS Surf Club members, CHSS alumni, and community members, with heats starting on the Old Lighthouse Beach in Buxton at 8 a.m.

Lunch will be served at noon after a full wave of heats in the morning, and a number of local residents and businesses have already stepped up to show their support through providing equipment, food and drinks, contest judging, photography and media coverage, and donated prizes.

“The event is supported by countless people and businesses working together for an unforgettable experience with a great cause,” said Tiderman.

Donations and T-Shirt sale proceeds will go to boost the CHSS Surf Club, which is a relatively new addition to the school that has already garnered a lot of acclaim from students.

Per Tiderman, the CHSS Surf Club started in the fall of 2017, but the idea of CHSS having a surf club had been bounced around for years before it finally came to fruition.

“It was my first year teaching at CHSS, [and] first year teaching anywhere, and the administration supported and encouraged us to have a surf club,” said Tiderman. “We currently have around 25 active members, with a near-even split between middle school and high school students.”

“The CHSS Surf Club is an organization that supports a passion for surfing, the water, and being good stewards of our ocean,” he stated. “The goal of the CHSS Surf Club is to help support students further participate in the passion of surfing while collaborating in an academic setting. Students have the opportunity to meet regularly with the members of the club, as well as the sponsors, to discuss all aspects of surfing during the confines of the academic day.”

The Dare County Board of Education recently recognized the CHSS Surf Club for “excellence in teaching students the art of surfing and instilling a sense of dedication, commitment, and hard work.”  During its regular sessions, the club comes together to discuss the past and future forecasts, watch professional surfing events, enhance their own abilities, and focus on protecting the coast – all while fostering positive relationships between students, staff, and the community.

By combining a perfectly appropriate tribute to legendary educator Ray Gray with a fundraising event to keep the CHSS Surf Club going strong, the inaugural Ray Gray Surf Classic is a fine opportunity for surfers and spectators alike to enjoy a sunny beach day to the fullest while doing some good for the island’s students and surfing future.

The event is wide open to the public, and everyone is invited to come out and witness the remarkable talent of the Hatteras Island surfing community.

Beginning with the April 19, 2021, Dare County Board of Commissioners meeting at 5 p.m., all public comments will be presented in-person or by sending an email to the Board. Public comments via email are accepted from the time the public meeting notice goes out until the meeting ends. Those providing public comments in-person must adhere to [...] Community News Brief |  Full Article

Every three years, the Hyde County Health Department, in collaboration with local and regional partners, conducts a Community Health Assessment to evaluate the health of our county. As a part of this assessment, we distribute a community survey in order to gain feedback from community members and stakeholders regarding their views of health in Hyde [...] Community News Brief |  Full Article

The Outer Banks Chamber of Commerce has introduced the new “EXPLORE, EAT, SHOP, STAY, LOCAL” campaign for 2021.  While the OBX has experienced an early influx of visitors to the area the Chamber wants to keep the focus on local spending. “Dollars spent locally circulate throughout the region and cotinue to help all our businesses [...] Community News Brief |  Full Article

Meet the Outer Banks SPCA Pet of the Week Gina