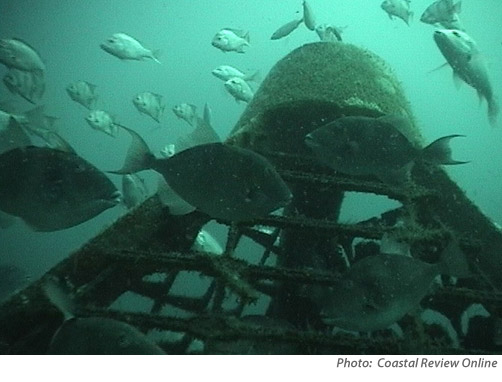 A new artificial reef that will be located approximately eight miles south of Oregon Inlet and three miles off the beach will be the focus of the upcoming monthly meeting of the Outer Banks Anglers Club.

The meeting, which will be held at the Hilton Garden Inn on Monday, October 29 at 7 p.m., will feature guest speaker Jordan Byrum of the NCDMF Artificial Reef Projects, who will be discussing the status of the new artificial reef (AR-165), which is sponsored by the Outer Banks Anglers Club Artificial Reef Committee.

“The club has been working on making this reef a reality for several years and we are close to beginning construction,” said Anglers Club Publicity and Community Relations Coordinator Tony Lombardi in an emailed statement. “We want as many anglers who will be benefitting from this reef to join us for [this] important discussion.”

The creation of the new reef started a little less than three years ago, and chairman of the Artificial Reef Committee Dick Parker reports that everything is in hand except the final federal permit.

“That is the only thing we are waiting on,” said Parker. “We have everything ready to go including the CAMA permit, and the money required. Hopefully, [the speaker] will be give us answers on Monday as to when we can expect to get the permit for the new reef.”

The meeting will also touch on the debris from the upcoming demolition of the old Bonner Bridge, which is slated to be added to four existing reef sites in the area.

“There has been no new material placed on any of our existing reefs in more than 10 years,” said Parker,  “and the material that was placed on the reefs in the past – like U.S. Coast Guard aircraft or boxcars – has not held up well in the ocean conditions.”

“The best material to put on a reef is concrete – It’s not going anywhere, and that’s why we’re looking forward to getting the Bonner Bridge material there,” he added.

55% of the Bonner Bridge material will go to AR-160, which is the reef closest to Oregon Inlet. The remaining 45% of the material will be split up among the other reefs which are north of the inlet.

The new reef, AR-165, will initially be comprised of 2,000 tons of concrete pipe up to 8 feet long and more than 6 feet in diameter, and more material – which possibly includes an ocean tug boat – will be added in the future, depending on costs and availability.

The Outer Banks Anglers Club received an $882,000 state grant to build the reef, which stemmed from the sale of coastal recreational fishing licenses, as well as donations for the project, including a substantial $20,000 contribution from TW’s Bait & Tackle.

The meeting will hopefully shed light on when the remaining pieces of the project – namely the federal permit – will be ready, so that the new reef project can begin.

The public is welcome and encouraged to attend the upcoming Monday meeting to both learn about the project details, and to show their support for the current and new artificial reefs in the Oregon Inlet area.

“We would love to have a good crowd there to demonstrate the interest of the local population to get these local reefs back into production,” said Parker.

“It is vital that the NCDMF see the community support for this reef,” stated Lombardi. “…This participation should go a long way to assisting our area at securing more funds for additional reef projects.”