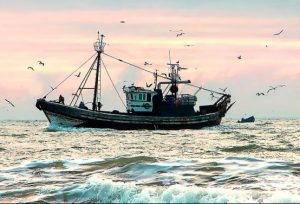 The Dare County Working Watermen Commission hosted Director of the North Carolina Division of Marine Fisheries (DMF), Steve Murphey, at its quarterly meeting on Wednesday evening. The commission, whose role is to make recommendations to the Dare County Board of Commissioners on governmental decisions affecting the local commercial fishing industry, is currently made up of seven members, most of whom are commercial fishermen and women themselves. Not only commission members, but local citizens as well, expressed concerns about the Southern Flounder Amendment 2, Spanish mackerel quota, and a recent shrimp petition at Wednesday’s meeting.

Commission Chairman Steve House began the meeting at the Rodanthe-Waves-Salvo Community Center by introducing Murphey and thanking him for being there. Murphey, who has worked with the DMF since the 80s, was appointed to the title just last year. His duties as director include upholding the Division’s mission to “ensure sustainable marine and estuarine fisheries and habitats for the benefit and health of the people of North Carolina,” and overseeing nine sections of the DMF.

In his opening statements, Murphey addressed the Southern Flounder 2 Amendment. Using a Stock Assessment Plan (SAP) model, the Division has proposed a Fishery Management Plan (FMP) with suggested threshold and target reductions in order to end overfishing in two years and give the population a chance to rebuild. Since 1989, the Division has seen a 70% decline in the population of fish reaching maturity. The problem is not isolated to N.C., though, and runs the length of the southern East coast Down to Florida. A decision on the southern flounder amendment is scheduled to be made next Friday morning with a recommended start date of September 1. Murphey is hopeful that if the population has the chance to recover, it will do so rapidly.

Others expressed a weariness of the increasing size limits and reductions in quota, noting that requirements have continued to increase since 1995 with no empirical evidence of the population’s increased vitality. “Flounder is the most expensive fish we sell in my retail market, higher than Snowy Grouper which have been on a federal rebuilding plan for twenty years, and stocks still are not rebuilt,” stated commission member Alana Harrison. “So I want proof from Marine Fisheries that Flounder will actually be rebuilt in the ten years they claim.”

Many also wonder if the DMF is taking every aspect of population health into account, such as adverse weather events and differences in participation from year to year. While Murphey noted that the DMF has seen a decline in the number of people holding a commercial fishing license as well as entries in the trip ticket program, one commercial fisherman in attendance attributed this to the increased regulations.

Others suggested that they have seen a healthy population, but aren’t allowed to harvest it.

“It’s hard to sit here and see a million and a half pounds uncaught,” one commercial fisherman in attendance said. “It’s not that it’s not there, you just can’t get at it.”

“Mismanagement has caused this problem, not overfishing,” another commercial waterman said.

Murphey admits that there are gaps in the Division’s knowledge, but that the signs of overfishing are still obvious. He stated that commercial fishing industry makes up a majority of the harvest of this fish, while Florida holds a majority of the recreational fishing harvest. Murphey noted that N.C. really need the cooperation of other states in order to make sure the rebuilding of the population is successful, but the likelihood of their support on this issue is obscure.

“Right now, we are the only one of four states taking any measures on this issue,” Murphey said.

One of the major issues addressed was the movement of species deeper and more northward due to warming temperatures in the water. Murphey said his team is making moves to extend the SAP model to address the health of ecosystems as well as populations. This incorporation of environmental factors into the model has major implications and might mean addressing water quality and temperature concerns to the same extent as overfishing.

Susan West, who has been conducting surveys of fish houses along North Carolina’s coast, brought up concerns about Spanish mackerel. So far this year, N.C. has already reached 91 percent of its quota for Spanish mackerel, and the season is not expected to last past August 20. Although N.C. has asked for an allowance of 100,000 pounds from Florida to extend the season, Murphey does not expect that this will occur. For the future, Murphey believes that N.C. will need to reallocate quota from the recreational sector to the commercial sector, and the trip limit will have to drop down from 3,500 to 1,000 pounds in order to extend the season through October. However, the quota can’t get adjusted until a new SAP is conducted, which won’t be for another few years.

A shrimp petition has recently been filed by the Southern Environmental Law Group on behalf of the N.C. Wildlife Federation which threatens to drastically reduce the commercial shrimp harvest. While the petition is mostly concerned with bycatch mortality involved in shrimp harvesting, it could affect the entire shrimp industry in North Carolina if it is approved. The Dare County Board of Commissioners has already sent a proposition opposing it but must wait for a decision from the N.C. Marine Fisheries Commission.

Owner of the Albatross Fleet and Vice-Chair of the Dare County Waterways Commission, Ernie Foster, has spoken up several times on recently proposed regulations in the commercial fishing industry. He noted that the further reductions will have a domino effect on both the economy and the community.

“I haven’t been involved in commercial fishing for a long time, but I live in the community. That’s what motivates me when I see the never-ending depths of a thousand cuts,” Foster said on Wednesday evening.

House reiterated Foster’s sentiments about the DMF’s lack of an adequate economic impact assessment. “At least go a little deeper to understand how it affects everyone on the island,” he said.

Overall, it seemed to many in attendance that there is a tragic gap between the DMF’s science and the actual daily lives of commercial fishermen in Dare County. A remedy to this situation might be the presence of local fishermen on advisory boards for both the South Atlantic Fishery Management Council and the NC Marine Fisheries Commission. Here is where to go to apply: https://safmc.net/about-safmc/advisory-panels/ and http://portal.ncdenr.org/web/mf/mfc-advisory-committees respectively.