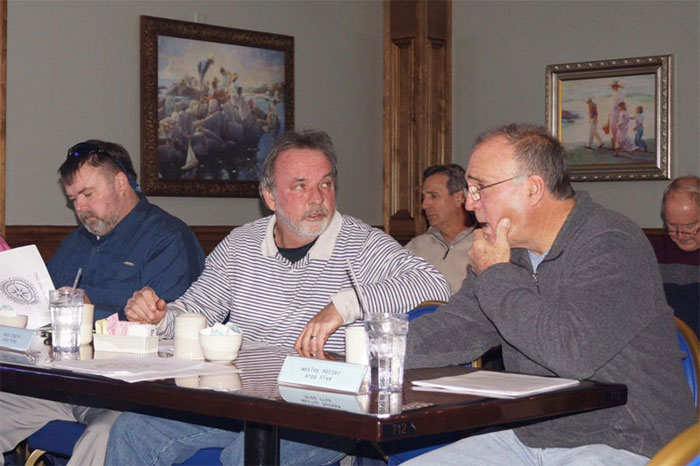 Captain George’s was the venue for the recent 2019 North Carolina Fisheries Association’s Annual Meeting, which addressed issues that included conflicts with special interest groups, shrimp trawl bans and aquaculture in the sounds.

NCFA board presided over an extensive agenda, discussing and taking comments from the dozen or so NCFA members attending on a wide range of legislative, regulatory and other issues the organization faces in 2019.

As board Chairman Brent Fulcher worked his way through the agenda, many of the same concerns facing the NCFA this year are the same, unresolved issues that were on the board’s plate five, 10, and even 20 years ago.

Primary among them were the continuing challenges of well-financed efforts of special interest groups claiming to represent recreational fishing interests.

For those who have followed these issues in the past, the actions of the Coastal Conservation Association, a national group with state chapters active in virtually every state, was once again behind several initiatives seen as a threat by the NCFA to their industry.

The CCA has succeeded in reducing quotas of fish allotted to commercial interests, removing entire species of fish from commercial harvest, banning the use of certain commercial fishing equipment, shortening the length of harvest seasons, and taking control of state agencies dealing with marine fishing resources, regulatory commissions, and even state legislatures from California to New York.

It wasn’t too long ago that the NCFA and other groups fought back attempts by the CCA to use the state legislature and the North Carolina Marine Fisheries Commission to ban three species (red drum, specked trout and striped bass) from all commercial harvest as well as a separate effort to ban shrimp trawling from the state’s inland waters.

Those issues, particularly shrimp trawl bans, are still looming on the horizon, as well as new efforts by the CCA to shut down certain portions of the Southern Flounder fishery in the state.

The board debated the quality of the scientific data backing some of these initiatives, some of it based on studies considered flawed by academic peer review groups, or paid for by the same special interests seeking these bans or reductions in commercial harvest.

They listened as members related how all of their landings are accounted for as a result of regulations requiring those catches to be recorded by “fish houses” while recreational catches are largely based on estimates. For commercial fishermen, when the landings indicate the maximum allocation for a fish species has been reached, the entire fishery is closed for further commercial harvest, while recreational takings continue.

The same situation exists, in their eyes, when data on fish mortality is circulated. Commercial vessels often have observers who sample catches for mortality and the capture of non-targeted species, while discards among recreational anglers, which often result in fish mortality, are likewise estimated from scanty data.

The board also dealt with the emerging aquaculture industry in the state, particularly oyster farming in inland waters.

In general, the NCFA board and members were supportive of the new industry because it allows their members to add another revenue stream as restrictions on other fishing activities reduce traditional sources of income.

But there were concerns also: Will the increase in oyster farming, where acres of underwater cages house the growing oysters, interfere with commercial trawls, hook and line and other fishing techniques?

The board also lamented the lack of attention from the state, media and even among their own membership on water quality issues, especially where runoff from as far away as the state’s mountains, push contaminants into the inland and coastal waters in the eastern part of the state.

Other fishermen questioned whether many of the regulatory “cures” imposed on both commercial and recreational anglers actually made problems worse.

As one member from the audience noted, all fish are predators of other fish, so when the state protects rockfish (striped bass) and their numbers explode, one can expect a decline in flounder numbers as the rebounding rockfish population feeds on stocks of other species.

Another member cited a similar situation with flounder regulations, where the state has steadily increased the length of a flounder that can be legally taken by recreational anglers.

Hooked flounder often swallow the hook whole making it difficult to extract it without mortally wounding the discard. How many smaller fish are killed as anglers discard 13” and 14” flounder until they catch one large enough to keep? And how many larger female flounder, mature enough to reproduce, are lost because the size limit forces the taking of the older, more re-productively active fish?

The board also mentioned how the CCA and other groups want to remove inland fisheries from the control of the MFC and transfer oversight to the state’s Wildlife Resources Commission, an agency with no mandate to balance fisheries among recreational and commercial interests or experience in fisheries management where the two groups overlap.

If all of those issues weren’t daunting enough, the board dealt with their small budget ($300,000) to carry on with their mission of protecting the cultural, historic and economic aspects of their industry against organizations backed by funding from the likes of Yamaha, Yeti, Costa and others, the potential effects of a new federal law, the “Modern Fish Act” (passed by the GOP-controlled House and Senate, signed by President Trump and supported by the CCA) and what appears to be diminishing media interest in commercial fishing and their side of the story when legislative and regulatory issues are being considered.

Hogfish are strange-looking members of the wrasse family. Their first three dorsal spines are long and trailing, extending several inches off their dorsal fin. This species is more laterally compressed, or flattened from side to side, and more oval-shaped when compared to other marine fish in the wrasse family. They have cool, red irises in [...] Fishing |  Full Article

by Robert Michelson The state Division of Marine Fisheries earlier this spring imposed new recreational bag limits and commercial season closures to protect stocks of spot and Atlantic croaker. As previously reported, effective April 15, the recreational bag limit for spot and Atlantic croaker is 50 fish per person, per day, per species, and applies to all [...] Fishing |  Full Article

By Coastal Carolina Fisherman Every creature in the estuarine, nearshore, and bluewater environments plays an important role in the health and sustainability of our offshore fishery food web. Every creature from the lowly phytoplankton, to zooplankton to the pelagic giants at the top of the food chain absolutely depend on a bait sequence to survive. [...] Fishing |  Full Article

The N.C. Division of Marine Fisheries is accepting public comment on proposed management changes to further reduce bycatch of non-target species and minimize ecosystem impacts. Draft Amendment 2 to the Shrimp Fishery Management Plan contains a suite of management options that range broadly from status quo to a complete closure of all inside waters, including [...] Fishing |  Full Article

The N.C. Division of Marine Fisheries is seeking input from the public on a draft spending plan for $4.5 million in federal fisheries relief that Congress approved in the 2021 Consolidated Appropriations Act (CARES Act II). The spending plan must be approved by NOAA Fisheries for the state to receive the funding. The draft spending [...] Fishing |  Full Article

The N.C. Marine Fisheries Commission voted on Thursday to take Draft Shrimp Fishery Management Plan Amendment 2 out for public comment and advisory committee review. The draft amendment focuses on reducing bycatch of non-target species and minimizing habitat impacts. It includes a suite of options ranging broadly from status quo to a complete closure of all inside [...] Fishing |  Full Article