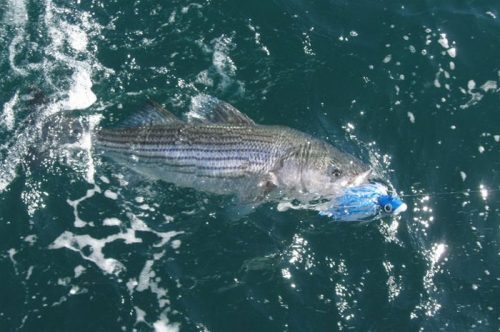 The N.C. Marine Fisheries Commission has adopted a no-possession limit for striped bass in internal waters in the central and southern coastal areas of the state.

The management measure, once implemented, will apply to both commercial and recreational fishing in in the Central Southern Management Area, which encompasses all internal waters from just south of Oregon Inlet to the South Carolina line. The waters that will be impacted include, but are not limited to, the Pamlico and Core sounds and the Tar, Pamlico, Pungo, Bay, Neuse and White Oak rivers and their tributaries.

The management measure will still allow recreational catch-and-release of striped bass in the impacted areas.

Research has shown that striped bass in the Central Southern Management Area are not a self-sustaining population and that fishermen are mainly catching hatchery-raised fish; however, data suggest there have been two recent naturally-spawned year classes. The no-possession management measure will offer additional protection for those non-hatchery fish and protect larger females which could increase natural spawning stock biomass.

Important in this review is discard mortality from recreational hook-and-line fishing and commercial gear in this fishery.

Tie down restrictions contained in Amendment 1 of the Striped Bass Fishery Management Plan have shown to reduce bycatch in the large mesh gill net fishery by up to 75 percent. Large mesh gill net users are required to tie the net down to no more than 36 inches from the bottom in most of the portion of the rivers where striped bass are encountered.

Additionally, large mesh gill nets are not allowed in the upper portions of the rivers within 50 yards from shore when commercial striped bass season is closed. This will apply year-round as long as supplemental measures are in effect. This reduces encounters with striped bass, which utilize submerged structure along the shore.

Recreational fishermen are encouraged to reduce catch-and-release discard mortality through the use of non-offset circle hooks and limited handling of released fish.

In other business, the Marine Fisheries Commission voted to: