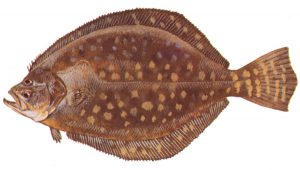 The recreational and commercial southern flounder seasons will close Sept. 4 in North Carolina waters. The N.C. Marine Fisheries Commission made the decision at its meeting last week, adopting the Southern Flounder Fishery Management Plan Amendment 2 as proposed by the Division of Marine Fisheries.

The commission did give the director of the Division of Marine Fisheries flexibility to change the dates of proposed commercial and recreational seasons so long as they still meet required harvest reductions. The division plans to issue proclamations this week that close the commercial and recreational season on Sept. 4. Changes to the allowable gears in the commercial ocean flounder fishery will also be implemented Sept. 4.

The commercial sector landings do not peak until September and October, so the current commercial harvest combined with the projected harvest during an upcoming open season is projected to equate to a slightly greater reduction than in the recreational fishery.

Analysis of Division of Marine Fisheries data indicates that from 2000 to 2018, as much as 50% or more of ocean-caught recreational flounder were southern flounder, as opposed to other flounder species (this includes beach and pier fishing). Since statistical data on the for-hire charter fleet is limited and has high margins of error, the division needs more time to consider whether to separate the for-hire seasons from other recreational fishing seasons.

Additionally, to encourage conservation, the N.C. Saltwater Fishing Tournament (Citation Program) will not issue citations for flounder during the recreational season closure.

Other Business
The Marine Fisheries Commission voted to:

On another issue, the commission voted to deny a petition for rulemaking that, if implemented, would impact the state’s shrimp trawl fishery.

The petition, filed by the Southern Environmental Law Center on behalf of the N.C. Wildlife Federation, asks the commission to designate all internal coastal waters not otherwise designated as nursery areas as Shrimp Trawl Management Areas and for additional gear and time restrictions within these new areas. A previous petition on similar issues, which included the ocean, was rejected based on fiscal feasibility.

As a result, the Marine Fisheries Commission directed the division to consider elements of the petition in an upcoming amendment to the N.C. Shrimp Fishery Management Plan. The fishery management plan process includes input from stakeholder advisory committees and a public comment period. Work on the Shrimp Fishery Management Plan, scheduled to begin this year, will now proceed.

Additionally, new management measures were recently put in place to reduce bycatch in the shrimp trawl fishery. In July of this year, the Division of Marine Fisheries implemented measures from the latest amendment to the shrimp plan that require gear modifications in shrimp trawls for internal coastal waters. Testing has shown the required gear configurations reduce finfish bycatch 40 percent or greater.

Moreover, the Division of Marine Fisheries, along with the Albemarle-Pamlico National Estuarine Program and other agencies, is finalizing mapping of submerged aquatic vegetation in the sound to accurately identify these essential fish habitats.

The N.C. Division of Marine Fisheries wants to remind the public to report any cold stunned spotted seatrout they may see in North Carolina coastal waters. During the winter, spotted seatrout move to relatively shallow creeks and rivers, where they can be vulnerable to cold stun events. Cold stun events have the potential to occur [...] Fishing |  Full Article