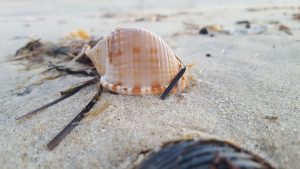 There are many reasons why people go to the beach.  Some go with all of their family members in tow, and others go by themselves. There are fisherman and surfers, sunbathers and swimmers. There are kids building sandcastles and parents reading under umbrellas. Some come for an action-packed beach trip, and others come to do absolutely nothing at all.

Then there are people like me who go to the beach to beachcomb.

Beachcombers walk along the shores, scanning the tidal lines with wondering eyes, while trying to find the treasures left behind by the ever-crashing waves of the Atlantic Ocean.

For the past five years, I have been beachcombing every day, and in the beginning all I looked for were seashells, (and of course trash), because shells were the only thing that I thought I could find, and all I thought I could collect. But there are so many more different types of gifts that wash up besides seashells for beachcombers to discover, like fossils, sharks’ teeth, driftwood and seaglass, just to name a few. The varieties of treasures that can wash up – and the quantities of them that can appear – are determined by many elements, and is more than just knowing a secret spot, as many people tend to think.

Beachcombers learn to pay attention to factors like the weather, wind direction and speed, water temperature and currents, plus many other forces in nature that help determine the conditions for a good beachcombing session.  The best way to know if there are treasures to be found is to go, because no one knows for sure what is going to wash up.  Often times, I walk for miles and hours to find nothing, then other days I only have to walk five feet and there are more gifts than I could ever carry.

Seashells were the first gift I fell in love with from the ocean, so I decided to highlight the Scotch Bonnet in this inaugural beachcombing article, as it is one of my absolute personal favorites to find, and incidentally, is North Carolina’s official seashell.

Our gorgeous state was the first in the country to have an official seashell, and the Scotch Bonnet was established as the states shell in 1965.  Many other coastal states have since done the same, although not all states that border the Atlantic Ocean have elected to do so.

Phalium granulatum, the Scotch Bonnet, is a gastropod seashell and is classified in the Cassidae family, more commonly known as the Helmet family. 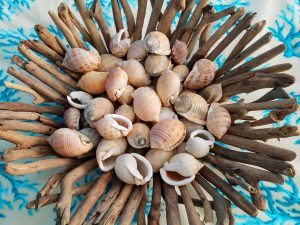 up, and are known to get very large. The Scotch Bonnet does not get very big compared to the other helmet shells, and in fact, the North Carolina state record measures only 3.5 inches.  The Cameo Helmet shell, for comparison, has a record in our state measuring more than 10  inches, as does the Clench Helmet, and both of these shells are typically found in more tropical areas, like the Caribbean.

Scotch Bonnets live in the deep, tropical waters of the Gulf Stream and the proximity of the Gulf Stream to the land on Hatteras Island can determine if any of them will be found on our local beaches.  They are carnivores, and eat sea urchins and sand dollars. Their predators, besides birds, are blue crabs who can crush the shell with their claws and eat the snail underwater.

Storms from the Southern Atlantic region that hit Hatteras or Ocracoke islands tend to leave Scotch Bonnets on the shores because the warm waters of the Gulf Stream, where the seashells live, have been pushed a little closer to the shoreline.  The Outer Banks frequently has rough waves, especially outside the summer months, which can violently toss seashells around and throw them ashore with force.  This roughness, plus the Scotch Bonnet’s fragile structure, (especially once the animal has emptied it), makes this shell susceptible to being damaged.  Beachcombers often find parts of Scotch Bonnets scattered along the beaches of North Carolina, so finding a complete one is a real reward for a dedicated collector.

Sometimes you will find a Scotch Bonnet laying up high by the dune line, away from the tideline, all by itself, and this is usually because a bird has carried it away from the flock so they are not disturbed while they get the animal out of the shell.  Seagulls and other marine birds will eat the animal inside the Scotch Bonnet once they have extracted it, often by dropping the live shell from high up in the air.  This action stuns the animal as it hits the sand ,which causes it to fall out of the shell enough for the bird to pluck it out and gobble it down, leaving the empty shell behind.

Other times, huge amounts of seaweed wash ashore and the Scotch Bonnets can be found mixed up in these piles of seagrass.  Using a stray driftwood stick to toss these piles around can often reveal hidden treasures, as the seaweed tends to live close to the Gulf Stream, and the shells can get tangled up in the seaweed which floats ashore.  Hopefully, the empty shell found is not cracked, or the tip has not been broken off, (which is common), and the beachcomber can take the beautiful specimen home to cherish forever.

There are two different types of animals that occupy a Scotch Bonnet. The original animal is a snail and the second “alien” critter resembles a hermit crab.  When the original inhabitant has vacated the shell, a hermit crab can move in, making the shell its new home. To defend themselves against predators, these animals can tuck inside the shell to hide. As such, always double check your Scotch Bonnets to ensure they aren’t’ already occupied.

As a “professional beachcomber,” finding a whole Scotch Bonnet never gets old,and I always get a rush when I see one laying on the beach, waiting to be collected. I encourage others to explore the sands on their beaches more, to learn more about the forces and dangers that shape the beach, and to create a community where people can discuss their different experiences of beachcombing.

About the Author: Kristin Hissong is a North Carolina native and UNC Charlotte graduate, an Outer Banks resident of 15 years, and is a dedicated, “professional beachcomber.” She has spent more 20,000 hours walking on both our local shores and shorelines around the Eastern Seaboard, and has collected thousands upon thousands of items from the Atlantic Ocean.

For the past five years, she has been beachcombing on Hatteras and Ocracoke islands every day, collecting both treasures and trash on her routine expeditions. From typewriters to coffee makers, fishing rods to recliners, if you name it, there’s a good chance she has seen it washed up, and has hauled it to back to her collection, or to the closest dumpster.

The Outer Banks Community Foundation’s membership honored two Champions, elected five board members, and celebrated $1.4 million in grants and scholarships in 2019 at the organization’s Annual Meeting on February 20. The Community Foundation also announced a major new grants initiative at its meeting, the 2020 Vision Grants, which will be launched later in the [...] Community News Brief |  Full Article

The island-wide effort to rebuild Ocracoke received some extra assistance from the Cape Hatteras United Methodist Men (CHUMM) for three weeks in February, thanks to the help of dozens of volunteers. CHUMM worked for the North Carolina Conference United Methodist Committee on Relief (UMCOR) from their Ocracoke Island Work Center. During the three weeks, more [...] Local News |  Full Article

A number of ferry routes through Eastern N.C. have been suspended as of Friday morning due to a coastal storm that is bringing high winds and rough seas to the Outer Banks. The Ocracoke-Cedar Island, Ocracoke-Swan Quarter, and Hatteras-Ocracoke routes are all temporarily offline, per a Friday morning update from the North Carolina Ferry System. [...] Local News |  Full Article

The Lifeline Outreach OBX Center in Salvo has grown by leaps and bounds since it first began in a storage closet at the Lifeboat Community Church in 2006. Now housed within its own building, complete with a thrift store, separate food pantry, and even a personal greeter in the form of Charlie the cat, organizer [...] Island Features |  Full Article

N.C. Highway 12 is open and passable as of Friday morning, but there are a few areas of windblown sand on the roadway south of Oregon Inlet. Travelers are advised to drive carefully and slow down for crews that may be working to clear sand from the pavement throughout the day. Snow flurries were reported [...] Local News |  Full Article

The N.C. Department of Transportation (NCDOT) has startedthe process of adding sand and sandbags to portions of N.C. Highway 12 on Ocracoke Island to address the lingering effects from September’s Hurricane Dorian. The project is designed to protect four segments of the roadway damaged by Dorian and a subsequent storm in November. The project involves [...] Local News |  Full Article

Meet the Outer Banks SPCA Pet of the Week, Gracie