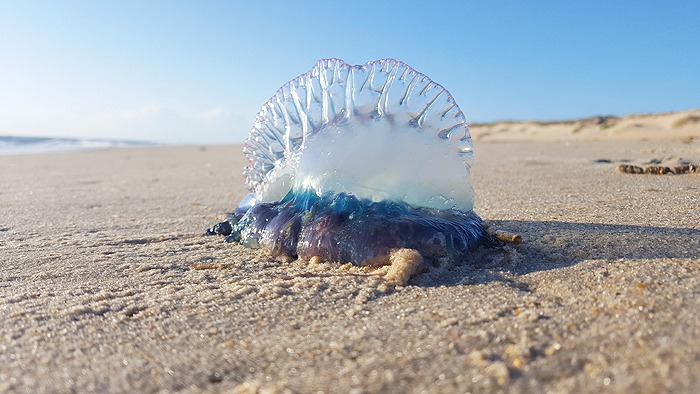 Living on the thin, shifting ribbon of sand known as the Outer Banks, many residents encounter a variety of unusual items that wash up along the coastline. For example, back in 2006, a massive amount of bags of chips

washed ashore, to the surprise and delight of beachcombers. There are many forces in nature like the wind direction and current flow that make these strange items wash ashore, often in huge amounts.

The clashing of two major currents – the Labrador Current and the Gulf Stream – is what shapes our sandbar, and is one of the major causes of unusual items washing ashore. When the Labrador comes down from the Nova Scotia area and collides with the Gulf Stream of the Caribbean, it can cause all kinds of things to wash up. This past month, one of these oddities that beachgoers discovered on the islands are venomous Portuguese man-o-wars.

The Portuguese man-o-war is a gorgeous shade of cobalt blue, and looks quite harmless laying on the shoreline, but don’t be fooled by its beautiful colors. These little blue blobs have extremely long tentacles that pack a powerful sting of venom.

Their beautiful blue, and sometimes purple, pink or mauve color makes people think they are jellyfish, but in fact, they are not. Jellyfish are single organisms, whereas man-o-wars are colonial organisms composed of many multicellular animals knowns as siphonophores. The Portuguese man-o-wars are made up of three types of medusoids, and four types of polypoids, which are tube shaped organisms. These organisms are physiologically interconnected and cannot survive alone.

The colony organisms are attached to an inflated bladder which is filled with gases. This gas bubble is what most people notice when the spy these creatures laying on the beach, but this part of the animal is the least harmful. The danger lies under this colorful bubble, where the integrated system of organisms lives, and where the tentacles are located.

A man-o-war’s tentacles are typically 33 ft. long, but can stretch to 90 ft. or more. Even after the animal washes ashore, it can deliver a powerful sting to anything that it touches. Beachcombers must be very aware, because the tentacles can get tangled up in seaweed, driftwood, and shell pits, and can sting an unknowing shell collector. They can also stretch out feet away from their bubble bladder, which can make them hard to notice.

The Portuguese man-o-war is a carnivore and uses these long tentacles and powerful venom to paralyze fish and plankton. Large groups of these man-o-wars can wipe out huge schools of fish, so one should use caution when approaching a large group of these washed ashore.

These interesting creatures move by the wind blowing the sail-shaped bubble across the surface of the ocean, which is also very different from jellyfish. Jellyfish can propel themselves very efficiently through the water, whereas the Portuguese man-o-war has no choice in the direction it moves, and relies completely on the wind for motion. The sail-shape of these animals is where they get their name, because they resemble an 18th-century Portuguese warship at full sail.

There are very few predators of these marine animals, but one of them, which is a frequent visitor to our beaches, is the ever-beautiful loggerhead turtle. Their skin, including their tongue and throat, is too thick for the venom to penetrate, therefore these turtles feed upon them frequently.

The Janthia seashell, which is an extremely rare and coveted shell for collectors, a blue sea slug known as Glaucus atlanticus, the blanket octopus, and the beautiful, big sunfish have all been found to feed upon these venomous creatures as well.

Beautiful in color but dangerous to touch, the Portuguese man-o-war is yet another marvel of our glorious ocean. Look for them on your next beachcombing adventure, but remember to keep your distance if you spot them in the ocean, or on the sand. Like so many unusual creatures that frequent our shorelines, (and like our neighboring Atlantic Ocean itself), when it comes to the Portuguese man-o-war, there is much more going on beneath the surface than meets the eye.