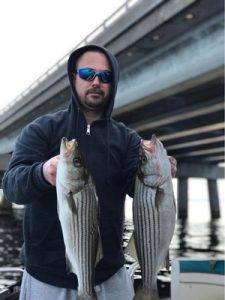 Dusten had great love for being on the water. He grew up beach fishing with the whole family. Dusten’s love of fishing led him to become a commercial fisherman. He did everything from long lining to working on trawl boats. But most of all- he was always ready to go shrimping, which he enjoyed tremendously. Dusten had a heart of gold. He was always there to lend a helping hand to anyone in need who needed help. The love he had for his family and kids was far and wide.

The family will honor Dusten’s preference for cremation.  His memorial service will be held Sunday, February 6, 2022, at 3 pm at Roanoke Island Christian Fellowship. Pastor Aaron Burgess will officiate. Expressions of sympathy and comfort may be shared with the family via the online register at gallopfuneralservices.com.  Gallop Funeral Services, Inc. was entrusted with arrangements.