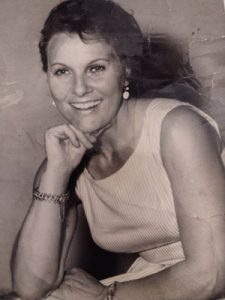 KILL DEVIL HILLS — Jacqueline Jacobson, 94, died Monday, October 17, 2022, at Spring Arbor of the Outer Banks, North Carolina,  where she lived for the last 10 years of her life.

Jacqueline Jacobson was born in France. She spent her early years growing up in Paris.  Jackie was a childhood actress and singer on stage in French theatre, mostly musicals from age 8 to 16. With two of her siblings, she worked in the theatre to assist the family financially during WWII and lastly during the occupation of Paris by the Germans. She was taught ballet, singing, dance, wardrobe, and acting continuously during her youth.  That is when she learned the art of makeup, hair styling and started her love of fashion which she exhibited throughout her life by keeping up with the current trends. She was always considered stylish. She became a war bride to her husband Philip. Living in Upstate NY after her marriage she was a housewife and became a mother to 4 while learning English and becoming an American citizen. Her husband Phil started a  successful produce farm in 1946 with his brother Kelly and much support from his wife “Jackleen.”  Jacobson Farms is still in existence today with three of their grandchildren carrying on the Jacobson legacy.

Jackie’s personality was both charming and captivating. She was animated and had a great sense of humor. Many friends said that she was a pure joy to be around. They also said that she was beautiful with a flawless complexion. Jackie was a  wife, mother, grandmother, great-grandmother, dance instructor, exercise instructor, administrative secretary at the Fulton Chamber of Commerce, and administrative secretary at Watkins-Johnson in Maryland. She also worked at times in the family farm business office doing payroll and answering the phone.

Jackie pursued many interests which included years of dinner parties for friends and family or growing plants and vegetables either in her greenhouse or in her many outside gardens. She sold many of her plants at a roadside stand enjoying her own little business that she created. Community theatre groups rekindled her childhood interest in acting, singing or volunteering behind the scenes in her early 50’s. Crocheting, running 5K races or fast walking events, and traveling to France many times to see her French family, mostly her sister, rounded out her life which never stood still or lacked excitement.

As per her wishes, Jackie was cremated. The family will have a celebration of her remarkable life for family and friends next July in Upstate NY.  Her ashes will be placed near her beloved husband Philip’s ashes.