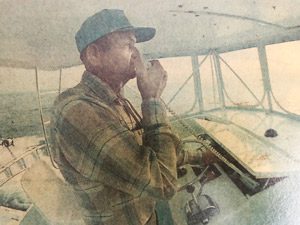 A native of Dare County, he was born March 9, 1929, to the late Theresa Wescott and Hiram Gregory “Sambo” Tillett.

Along with his father and brother, Tony, Omie pioneered the Outer Banks’ offshore charter fishing industry. Captain of the Sportsman out of Oregon Inlet, his boatbuilding skills were renowned.

In January 2009, Omie was awarded the Order of the Long Leaf Pine, the highest civilian honor in North Carolina, for his exceptional accomplishments and exemplary service as a citizen in his community. A member of the International Game Fish Association’s Hall of Fame, he was the 2010 Dare County Living Legend.

Above all, Omie was ‘topped off’ with love for the Lord. His signature “woooo” and holy ghost hugs were as well-known as his skills as a captain and boatbuilder.  He began every morning by blessing the fleet which started a tradition that continues today.

In addition to his parents, he was preceded in death by a daughter, Karen “Dolly” Tillett; grandson, Grant Buckner; sister, Polly Tillett; and brother-in-law, Jack Tillett.

A funeral will be held at 6 p.m. on Tuesday, July 9, 2019, at the Whole Ministries Center (826 ER Daniels Rd, Wanchese, NC 27981) with Pastors Stephen Wescott and Kenny Midgett officiating. Private burial will take place at Tillett Cemetery. The family will receive friends and relatives Monday evening from 6 until 8 p.m. at Twiford Colony Chapel (500 Budleigh St, Manteo, NC 27954).