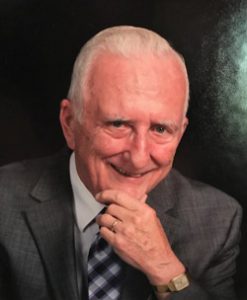 KILL DEVIL HILLS — Raymond Eugene Hunter, “Ray”, 80, of Kill Devil Hills, North Carolina passed away on April 16, 2019, after a lengthy illness. Born in Boswell, Pennsylvania he was the son of the late Ralph Hunter and Aeleen Spiegel Hunter.

After graduating from high school, he attended Cambria-Rowe Business School. Ray then moved to Laurel, MD where his good friend, Jim Fischetti, introduced him to Judy Sailer whom he married in April 1960. During their early years in Laurel, they welcomed 2 children, Kelly and Kim, and then moved back to Pennsylvania in 1963 where they quickly added three more daughters, Cindy, Barbie, and Susie. They returned to Laurel in 1967 and added daughter Stacy in 1970.

Ray worked as an office manager for Harding Pontiac in Laurel and then went on to Wilson Pontiac in Silver Spring. Ray was a member of St. Mary’s Catholic Church and was active in the Knights of Columbus.

Ray and Judy moved to Kill Devil Hills in 1986 to run the family business, The Dip and Deli. He became a Eucharistic Minister at Holy Redeemer by the Sea Catholic Church and continued his work with the Knights of Columbus. He worked for R.D. Sawyer in Manteo, NC as a salesman and office manager for 20 years.

Along with his parents, he was predeceased by his wife Judy, a granddaughter, Taylor Allison Barclay; and a sister, Donna Sterner.

In lieu of flowers, the family requests that donations be made in his name to The Alzheimer’s Association.

Twiford Funeral Home, Manteo is assisting the family. Condolences and memories can be shared at www.TwifordFH.com.