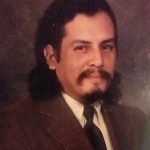 Bob served his country honorably in the United States Navy. While stationed in Buxton, he met and married the late Debra O’Neal, and they had three children together.

For many years, he was a cook at Lighthouse Restaurant for Gilda and Eris Waterfield and then for Tommy and Leah Butler at Tides Restaurant.

In addition to his parents, he was preceded in death by a daughter, Dori Reyes; sister, Mary Lou Reyes; and brother, Ronnie Reyes.

Twiford Funeral Home is assisting the family with arrangements. Condolences may be expressed at www.TwifordFH.com.