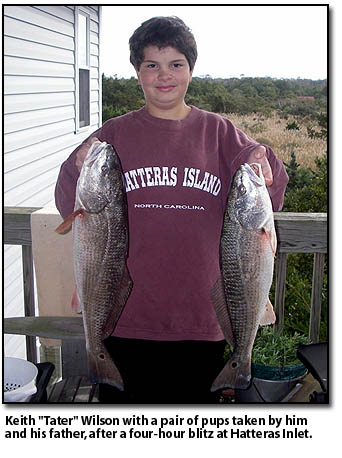 It has been a relatively slow couple months of fishing on the Banks. In fact, the past four winters or so haven’t been that great for most anglers. The hardened speckled trout fishermen seemed to find entertainment, but this year, even the speckled trout have been slim pickings.

The weather patterns are our worst enemy. Like the rest of the U.S., it has been darned cold here and that caused some weird patterns in fish migration.

The speckled trout shot down the backside of the Pamlico Sound waters and gave our neighbors to the south some good bites in what is now called the Southern Outer Banks.

There have been some stories of major speckled trout kills to our south because of the cold weather. But not to worry. The blame for those kills will be pushed onto the commercial gill netters in the next couple weeks.

The big story is how the puppy drum came shooting out of the sound at every inlet on the Banks and has lead to the single largest rush of puppy drum that even the oldest islanders can recall. From Pea Island to the south end of Ocracoke, the bites are epic.

The range is over 50 miles of shoreline, with most holes or sloughs producing puppy drum. Frisco has seen the absolute best of it, with daily runs into the hundreds of fish range.

From a video standpoint, I acquired more footage than I would need for five documentaries, and I did that in just a few shoots.

Fish hit the beach like seashells in a northeaster.  This happened every day for more than three weeks and is still happening as I write this article.

An angler needs only a speckled trout rod and a lure. At times it seemed that one type of lure was better then another, but then that would all change. And you would realize that the fish were smacking anything that moved.

I warn that if you would like to catch one of these fish, you may want to rush down here soon.

Many zealous recreational fishermen, special interest groups, and magazines have claimed that the loss of red rum to commercial fishing is overwhelming and that if commercial gill net fishing is not stopped soon, we may lose them all.

But I guess those special interest group’s advertising dollars look real good to these individuals, magazines, TV shows, and even fishing documentaries.

So here’s to all the people who just love to fish and to those that think red drum are disappearing.