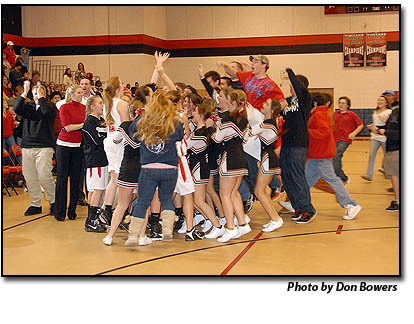 Friday night’s sectional final match between the Cape Hatteras Lady Hurricanes and the Jones Senior High Lady Trojans may not have been the most exciting game the Canes have played this year—or even this week—but they scored a decisive victory, nonetheless, beating the Trojans 50-46 and moving on to the fourth round of the NCHSAA 1A state playoffs.

The Trojans looked like a very athletic team, a fact that Head Coach Earl Fountain confirmed before the game. “They’re good,” he admitted. “But we’re ready.” The key, he said, to a Hurricane victory would be rebounding.

For most of the first half of the game, the scoring was tit for tat. The Trojans took the first possession and scored almost immediately, with an under-the-basket play by No. 15, China Marshall—a strong post player who would plague the Canes until she fouled out late in the fourth quarter.

But the Canes retaliated with a bucket of their own from sophomore Maggie Easley. Easley proved to be the Hurricanes’ answer to Marshall. She established herself as a force in the paint and carried the Hurricane offense, scoring 16 of the team’s 28 first-half points.

As Fountain had predicted, controlling the boards was the key to controlling the game.  The Trojans weren’t very strong on the perimeter, and the Hurricanes were clogging the lane with a tight 2-1-2 zone defense.

Preventing the Trojans from getting second- and third-shot opportunities proved to be one of the Hurricanes’ most effective defensive weapons, and the Hurricanes were hitting the boards hard, aggressively boxing out and forcefully jerking down rebound after rebound.

By the time the buzzer sounded at the half, the Canes had managed to post a four-point lead over the Trojans.

When they came back out after the half, though, it seemed that the Canes had lost some steam.

Right off the bat, Easley sank the foul-line jumper that she’d been hitting so well in the first half, but several minutes passed before the Canes were able to put any more points on the board. The Canes struggled to get something going on offense, and their outside shooting—which was so hot in the first half—was abysmal. On top of that, they were struggling to get rebounds.

The Trojans, on the other hand, started warming up from the perimeter and had taken control of the boards, and were able to put up whatever didn’t go in the first time.

Toward the end of the third quarter, the Canes, who were on their third game for the week, were starting to look very tired, and they were starting to play very sloppily—throwing the ball away, forcing bad shots, and letting the Trojans get to loose balls first.

They  managed to maintain a one-point lead going into the fourth, but the Trojans had gained some momentum, and it would take a couple of big plays to swing that momentum back to the Canes.

The first play came when senior Tori Ballance was fouled on a three-point shot. She went to the line and sank three of the prettiest free throws you could ask for.

Then just a few seconds later, senior Paxton Gwin grabbed an impressive rebound  — she must have a 30-inch vertical–  drove past three Trojan defenders, and dropped the ball in the basket with a finger roll lay-in that ignited the crowd and injected some much-needed life back into the Canes.

The Trojans started fouling out of frustration. With less than four minutes left in the game, the fouls were seven to one, and with 34.5 seconds left, the Canes went into the double bonus.