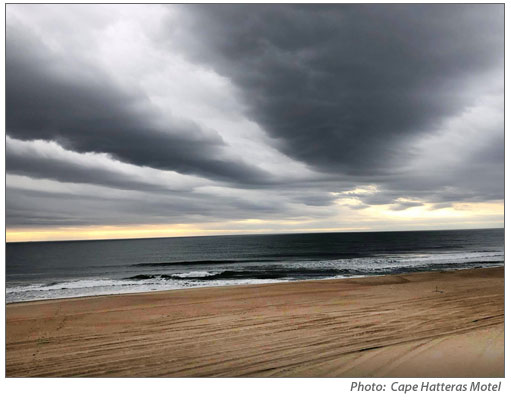 The Buxton Beach Nourishment project was completed on Tuesday, February 27, with 100% of the 2.6 million cubic yards of sand deposited on the 2.9 miles of Buxton beach.

The completion of the project was roughly a week or two ahead of schedule, and was announced to involved parties and stakeholders at a Wednesday morning meeting in Buxton.

“Yesterday was a big day, as it was the last day of pumping,” said Dr. Haiqing Liu Kaczkowski, Senior Coastal Engineer for Coastal Science and Engineering (CSE). “A week ago, they were 92% complete. Everybody thought it would take another week or two [to finish], but then we got good news.”

The contractor, Weeks Marine, had logged in more than 114 hours of work in recent days, and had been breaking records on the amount of dredging completed during the project.

Alberto Saavedra of Weeks Marine said that the crew would be removing all equipment from the beach over the next three days, before forecasted severe weather arrives over the weekend

“Hopefully by this weekend, all of the beach will be released to the public except for a small footprint,” he said.

The only elements from the project remaining will be two sublines, as the contractor will be unable to remove those before the bad weather arrives. However, Saavedra noted that crews would be patrolling the subline areas to ensure they are not impacted by any upcoming rough seas and winds.

The final steps will be restoring the beach to its pre-construction state, leveling the recently deposited sand, and possible tilling depending on the results of a pending compaction test.

National Park Service and Dare County representatives also discussed the possibility of adding county-funded sand fencing and vegetation (or “sprigging”) along the project area to protect the newly deposited sand.

“We asked Haiqing [and CSE] to come up with a plan for fencing and sprigging,” said County Manager Bobby Outten. “Assuming all goes well, it’s our intention to do just that.”

“This is a $22 million dollar investment, and we want to protect it,” added Dare County Commissioner Chairman, Bob Woodard.

Though possible Dare County-sponsored sand fencing is in the initial discussion stages, Kaczkowski noted that installing sand fencing was an important step for affected homeowners and stakeholders. “Sand fencing will help stabilize the dunes, so it’s a smart move,” she said. “It will protect your investment.”

In the meantime, both CSE and Weeks Marine were anticipating getting all equipment removed from the beach, so that the Buxton shoreline would get “back to normal.”

“We’re anxious about getting everything cleared out, and getting back to normal, so it looks like nothing has occurred,” said Dr. Timothy W. Kana, President of CSE. “We’ll still have natural rhythmic variations along the beach,” he added, noting that upcoming storms would shift the geography of the shoreline, “and that’s something we will be monitoring. With each project, we learn something new.”

“Our goal is for people not to recognize this as an unnatural beach,” he said.

The weekend’s forecasted windy weather, with gusts of up to 40-45 mph and high seas, will be a bit of a test, but will also speed up the adjustments that will transform the shoreline from unnaturally wide to more in-line with the other shorelines on Hatteras Island.

“What we’re trying to do is keep as much water off the highway as we can,” said Dare County Commissioner Danny Couch. “We’ve had two tests [of severe weather] so far, and it’s doing its job.”

Dare County and NPS representatives also thanked CSE and Weeks Marine for sticking with the project through its completion. The Buxton Beach Nourishment project was originally intended to last until August, but rough weather in the summer and fall, as well as a month of hurricanes in September, lead to multiple delays.

“We’ve had struggles since the beginning, and some angst, but we’re very appreciative of the job you’ve done,” said Commissioner Chairman Woodard. “Thank you for staying on it, and for staying with it. It’s been a long time coming, and it’s certainly needed for Buxton folks.”